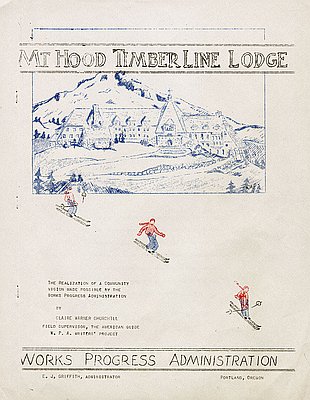 This is the front page of a history of Mt. Hood’s Timberline Lodge, written by Portland area writer and teacher Claire Warner Churchill. Churchill was a field supervisor for the Works Progress Administration (WPA) Writer’s Project. The WPA was part of President Franklin D. Roosevelt’s New Deal, a huge collection of federal programs that provided economic relief and jobs to the nation’s poor and unemployed. The program included construction and cultural projects. In what became known as the “New Deal for the Arts,” the government paid artists, musicians, writers, dancers, actors, craftsmen, and photographers to create a variety of works. Nationally, the WPA employed more than 8.5 million people.

The WPA also funded and oversaw the construction of the Timberline Lodge ski resort. In 1937 and 1938, At least 400 men and women worked to build and furnish the lodge. Four architects designed the building and Portland-based interior designer Margery Hoffman Smith oversaw a staff of woodworkers, ironworkers, artist, and weavers whose hand-crafted products helped make the Timberline Lodge into a showcase for the WPA.

This photograph appeared in the Oregon Journal under a banner headline announcing the November 6 opening of the 1938 winter skiing season on Mt. Hood. An accompanying article estimated that 2000 skiers participated that day, both at Government Camp and at the recently completed Timberline Lodge. The article noted that …