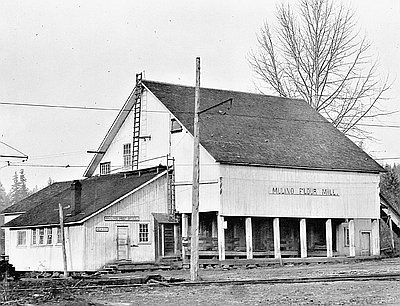 The photograph above depicts one of Oregon’s earliest flour mills, built in 1851 by Richard R. Howard on the banks of Milk Creek, a tributary of the Molalla River on the east side of the Willamette Valley. An isolated rural industry, Howard’s mill was in business for nearly a century, and is pictured here as it looked in 1920.

Richard and Cynthia Howard and their six children migrated overland to Oregon in 1846, and established a Donation Land Claim of 640 acres centered on what is today the community of Mulino. Here they built a log cabin and Richard Howard began to construct a water-powered sawmill on the creek, which he finished in 1848. Howard, who had learned the trade of milling grain when he was a young man in Maryland, then decided to add a grist mill to his properties.

The mill was sited on the oxbow of swift-running Milk Creek. A dam was built across the creek to feed water into a fast-moving channel known as the mill race. Water in the race turned the waterwheel and provided the power to turn the burrs (millstones). The stone burrs came from New York State, sailing around Cape Horn and packed in by wagon to Mulino. The plain, rectangular mill building is framed with hew wooden posts set on a wooden sill. Several  additions, similarly sided, were made about 1890, including the loading dock—with a second story supported by wooden beams—and the shed-roofed annex serving as the Mulino post office.

The grist mill’s principal task was to convert wheat to flour, and by 1851 the Willamette Valley was producing a great deal of wheat. Flour was even shipped by pack train to the gold mines of southern Oregon in the 1850s. In addition to soft wheat from nearby farms, the mill ground hard spring wheat brought in from eastern Oregon. The post office at Mulino—derived from the Spanish word for mill, molino—was established in 1888, but a railroad did not arrive until 1915, when it received a spur of the electric-powered Willamette Valley Southern Railway. Changes in agriculture—the reduced production of wheat in the Valley and the creation of large railroad- and ship-oriented traffic in wheat production and distribution—dictated a stop to milling flour in 1924, but the Howard family continued to mill poultry and dairy feeds there until 1958.