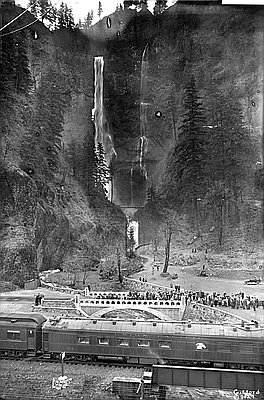 While the exact date of this photograph of Multnomah Falls is unknown, careful study determines it was taken between 1914, when the stone footbridge in the middle was built, and 1925, when the Multnomah Falls Lodge was built. If the same photograph were taken after 1925, the lodge would be depicted in the lower right of the photograph, behind the crowd of people.

Earlier photographs of the falls show a wooden footbridge in place of the stone one in this photograph. When timber magnate Simon Benson owned the property, he built the wooden footbridge, which was also known as the Benson Bridge. He later donated Multnomah Falls - and several hundred nearby acres to the west, including Wahkeena Falls - as Benson Park to the city of Portland on September 6, 1915. In addition to supporting municipal parks, Benson was also a large supporter of the Columbia River Highway, which was being built at the same time and would pass directly by the falls.

A Union Pacific railcar is visible in the foreground of this photograph. Henry Villard's Oregon Railway and Navigation Company (OR&N) built railroad tracks along the south side of the Columbia River, from Portland to near what is now Pasco, Washington, during the 1870s. The OR&N ran a Multnomah Falls station from April 6, 1884, until just after World War II.

Early estimates of Multnomah Falls' height varied, and many old photographs label the falls as being over 800 feet tall. The United States Geological Survey measured the falls in 1916 and found that the total drop of both the upper and lower falls is 620 feet. The falls' source is at the top of Larch Mountain, over 4,000 feet above the river.