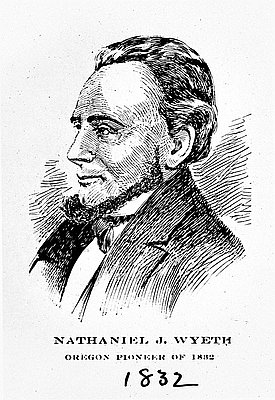 A businessman from Cambridge, Massachusetts, Nathaniel Wyeth played an important role in the Euro American colonization of the Pacific Northwest. As a result of his efforts to establish trading operations in the Columbia basin, he helped publicize the overland route to Oregon, and assisted the first group of Methodist missionaries to reach the region in the fall of 1834.

Wyeth led two expeditions to the Pacific Northwest, the first in 1832, and the second in 1834. His aim was to establish an American entrepreneurial presence in the region. Wyeth envisioned a diversified program of agricultural development, salmon trading, lumbering, and fur trading. Over the winter of 1834-35, Wyeth led a small expedition into central Oregon, making him one of the first Euro Americans to have extended contact with the Western Sahaptin and Northern Paiute groups living in the region. After leaving the Hudson’s Bay Company’s (HBC) Fort Nez Percés in late November 1834, Wyeth struck out for the Deschutes River following the trail of a group of Hawaiian laborers who had deserted from Wyeth’s employ. He pursued the Hawaiians for the next two months, while also trapping beaver and exploring the Deschutes River for a considerable distance.

Given the unfamiliar terrain and the inclement winter weather, the Wyeth party often relied on Sahaptin and Paiute villagers for their survival. They obtained information on the Hawaiians, as well as food and fresh horses through trade with the Natives. On February 3, 1835, Wyeth visited the hot springs that would later become the site of the Warm Springs Indian Agency. When Wyeth learned a few days later that the surviving Hawaiians had made their way to Fort Vancouver, he led the expedition back down the Columbia River to the HBC’s central depot.

The New Englander’s endeavors were ultimately beset with many difficulties throughout his four years in the Oregon Country (1832-1836). These included personnel problems, a lack of foresight in planning, the great logistical challenges entailed in supplying Wyeth’s operations, strong competition from the HBC, and Wyeth’s own questionable management decisions. Wyeth finally left Oregon in 1836, returning to Massachusetts and his former profession of ice harvesting.