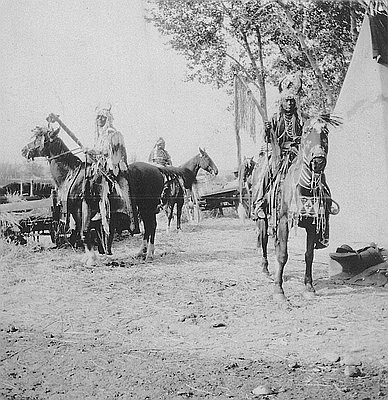 When Captain Meriwether Lewis passed through the Columbia Plateau in the spring of 1806, he wrote that he had not seen “a single horse which could be deemed poor and many of them were as fat as seals.” The rich grasslands of the Plateau provided year-round nourishment for the vast herds of Indian horses Lewis and his fellow explorers encountered on their way to and from the Pacific Ocean.

The introduction of the horse to the Plateau in the 1730s produced a number of important changes to Native lifeways. Horses greatly facilitated Plateau Indians’ seasonal movements, allowing them to travel greater distances and to carry heavier loads. Intertribal gatherings grew in size since people were able to travel from farther away to rendezvous with distant friends, relatives, trading partners, and allies.

The enhanced mobility provided by the horse also resulted in the political consolidation of formerly autonomous villages. This was in response to the increase in intertribal raiding resulting from the adoption of both horses and guns.

Horses also led to an expansion of trade networks and thus resulted in a much greater degree of contact with areas outside the Plateau. This last point is confirmed by the adoption of many elements of Plains Indian culture, including teepees, buffalo hunting, art designs, dances and songs, clothing, and horse tack.

The two Plateau Indian men in the foreground of this photo, dressed in their finest regalia in celebration of the 1912 Pendleton Round-Up, exemplify this connection with the Plains. Both are wearing buffalo horn headdresses while their horses’ chests are adorned with beaded martingales, items with Plains origins. Part of a teepee can also be seen to the far right.