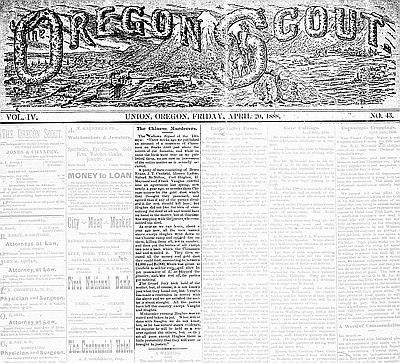 This newspaper article was originally published in the Wallowa Signal and later reprinted in the Union Oregon Scout on April 20, 1888. It describes one of the most horrific mass murders in the history of the American West, the 1887 Snake River Massacre.

In October 1886 a group of Chinese miners began prospecting for gold on the Oregon side of the Snake River upstream from its confluence with the Imnaha. Far from any settlements, this remote section of Hells Canyon was visited only by the occasional party of Indians, stockmen, prospectors, and outlaws.

Sometime around May 1887 a gang of white horse thieves met near Dug Bar about a half mile below one of the Chinese mining camps. Upon discovering the miners, the seven outlaws decided on a plan to rob them of their gold. They snuck up on the mining camp, laid an ambush, and proceeded to fire at the miners, killing them one by one as they tried to run away. The outlaws, not satisfied with murder, proceeded to brutally mutilate the bodies of their victims, which they then threw into the river.

The details of what happened in the initial attack are not clear, but according to the deathbed account of one of the participants, the killing spree continued the next day. Eight more Chinese miners arrived at the camp of their slain countrymen and were murdered in a similar manner. The killers then traveled by boat to another Chinese camp and murdered thirteen more miners. Accounts of the total death toll vary, but more than thirty men were probably slain over the course of those two bloody days.

The following month another group of Chinese miners discovered the massacre site and fled in horror to Lewiston, where they reported the crime to the authorities. The Chinese consul in San Francisco and the Chinese Six Companies began an investigation as soon as they got word of the tragedy, offering a $1,000 reward.

The ringleader, Bruce Evans, was eventually arrested for stealing livestock in the Wallowa Valley, but he soon escaped and fled the state, possibly to Montana. C.O. LaRue left the region shortly after the crime—it was rumored that he was later killed during a gambling dispute in California. J.T. “Tigh” Canfield was also arrested but he either escaped or was released on bail. It is thought that he served time in the state penitentiary in Kansas for another crime, then returned to Idaho where he worked as a blacksmith.

Although four of the other men involved in the massacre were captured and tried in September 1888, the jury found them not guilty. George Craig, a local rancher who had discovered some of the miners’ bodies, later commented that “if they had killed 31 white men something would have been done about it, but none of the jury knew the Chinamen or cared much about it, so they turned the men loose.”