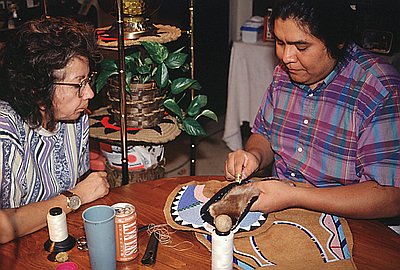 This photograph of Maynard White Owl Lavadour beading a cradleboard was taken by Eliza Buck in 1994. At that time, Lavadour was teaching Marlene Lavadour, Martha Franklin, Ellen Taylor, Mona Yeager, and Marcella Spencer how to make cradleboards in the tradition taught to him by his Cayuse and Nez Perce elders. The artists were all participants in the Oregon Folklife Program’s Traditional Arts Apprenticeship Program.

Maynard White Owl Lavadour was born in Pendleton, Oregon in 1960. As a child growing up on the Umatilla Indian Reservation, Lavadour spent a great deal of time with his elders—particularly his grandmother, Eva Williams Lavadour, and his great-grandmother, Suzi Williams. Under their guidance, at the age of five, he began learning basic beading techniques such as threading needles and stringing beads. He learned quickly and by the age of ten he was creating cradleboards, clothing, and cornhusk weavings—even selling some of his work. When he was fourteen years old Lavadour began teaching others how to make cradleboards.

Today, Lavadour’s work is on display in countless museums across the county, including the Smithsonian Institute. Subsequently, his reputation has made him one of the most highly sought-after Native-American artists in the country. Even so, Lavadour has remained firmly committed to passing on his knowledge of traditional arts to others in his community. “Just in my lifetime,” he explains, “I have seen so much of my culture and traditions neglected by both family and tribal members.  It makes me feel sad that this could happen in the matter of a few generations. Having had the opportunity to be raised as well as taught by my elders, I could not let these very important aspects of my culture vanish. That is why I continue to this day to make a living off of what I was taught and told.  I was the last in my family to be raised by the elders—to all which I owe a great deal. Teaching what I was raised with I feel is the best that I can do—for those that wish to take the time and patience to learn.”

Beaded buckskin cradleboards were once part of daily life for most Cayuse, Nez Perce, and Walla Walla families. Traditionally, cradleboards were a convenient and safe method of transporting and caring for infants. Children are snugly laced into the cradleboard where soft materials provide a warm, comfortable, protective environment. Cradleboards are typically designed to fit the size and personality of a particular baby, and depending upon the child, a mother might carry her son or daughter in a cradleboard for up to two years.

This necklace is strung with dentalia shells and beads. Dentalium (Antalis pretiosum) are variously sized ocean mollusks that resemble miniature elephant tusks and may grow up to several inches in length.  They first appear in the archaeological record of  Pacific Northwest coastal communities around 4400 B.C.E., but in small …

These trade beads are representative of the glass beads traded between Euro-American fur traders and Native Americans throughout much of northern North America.  They were found by archaeologists in the Rogue River Valley in southeastern Oregon.