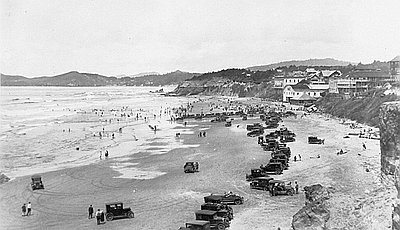 This photograph was published in the Oregon Journal on May 24, 1936. It shows beach-goers and their automobiles at Nye Beach in Newport.

Newport has long been a favored destination for vacationers from the Willamette Valley. One of the town’s first buildings was Samuel Case’s Ocean House, a modest hotel built in 1866. It took an entire day for travelers from Corvallis to traverse the rough wagon road connecting the Willamette Valley with Newport, but despite the uncomfortable traveling conditions, the Corvallis Gazette reported in 1879 that pleasure seekers were numerous at Newport, and “every house and camping place full.” In 1885 travel between the valley and the coast was greatly eased by the construction of a railroad from Corvallis to Yaquina City, several miles up Yaquina Bay from Newport. The railroad brought even greater numbers of tourists to the coast and led to a construction boom in summer cottages.

Automobiles began coming to Newport in the 1900s, though the road connecting the coast with the valley was impassable for most of the year. In 1919 voters approved a local bond issue to improve the road connecting the coast to Benton County. That year also saw the approval of a statewide bond issue to finance the construction of the Roosevelt Military Highway along the coast, today known as Highway 101. By the 1920s tourism had become a major industry in Newport and elsewhere along the coast due to these road improvements and the growing number of automobile owners in the state.

The onset of the Great Depression in 1929 cooled the growth of the coast’s tourist industry somewhat, but trips to the coast continued to be popular with the residents of the Willamette Valley. The photograph above shows a sizeable crowd of people on Newport’s Nye Beach, frolicking in the surf and walking along the beach. The article accompanying the photograph waxed poetic about the bountiful tourist opportunities offered by the Oregon coast: “There are fish in the streams and oceans, the woods are fragrant, the golf courses are green, the roads smooth, and on all sides there are invitations to the traveler to stop and enjoy himself.” The writer reminded readers that the newly finished coast highway bridges, including the Yaquina Bay Bridge (completed in 1936), will “speed up the trip and afford new centers of interest. Surf bathing, surf, stream, and lake fishing, boating, deep sea fishing, crabbing, clam digging, horseback riding and ‘just driving’ all have their moments and opportunities.”