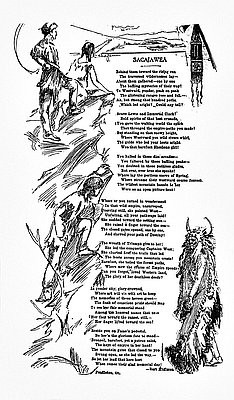 This poem, by Bert Huffman of Pendleton, was probably written in commemoration of a bronze statue of Sacagawea (Agaideka Shoshones spell it "Sacajawea"; the hard "g" comes from the Hidatsa spelling) and her son Jean Baptiste Charbonneau. The statue, which is now located in Portland’s Washington Park, was created by artist Alice Cooper for the 1905 Lewis and Clark Centennial Exposition. Sacagawea (Agaideka [Lemhi] Shoshone) was the only woman on the Expedition, and Cooper portrayed her as a guide and a pathbreaker who led the “conquering captains” westward to the Pacific. Huffman writes that she was the first to chart “the trails that led the hosts across yon mountain crests,” and the poem emphasizes her role in bringing to fruition America’s “manifest destiny.”

Early and mid-nineteenth century accounts of the Corps of Discovery rarely paid much attention to Sacagawea. That began to change in the 1890s, when interest in the Lewis and Clark Expedition increased because of the upcoming Lewis and Clark Centennial Exposition. Also during this period, the role of women in American society was undergoing a change, and Sacagawea was transformed from a little-known Shoshone woman into an American heroine, an “Indian princess,” who led a party of intrepid adventurers to the Pacific Ocean set an example for emancipated women everywhere.

Women’s rights advocates such as Susan B. Anthony and Eva Emery Dye (author of the popular novel The Conquest) characterized Sacagawea as a model of an independent woman. Such characterizations tended to distort Sacagawea’s role in the Expedition as well as her own life story—she had been taken as a slave at the age of twelve or thirteen and sold to a man more than twice her age—but the stereotype of Sacagawea as a “good Indian” who eagerly worked on behalf of American expansionism took root in the popular imagination. As Huffman describes her in his poem, she became a mythic figure and a “patron saint” of empire.