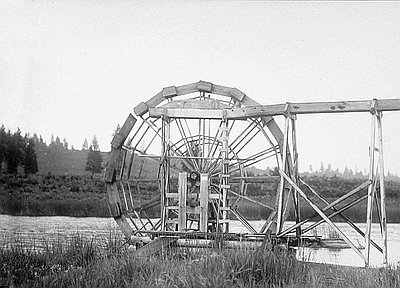 In 1905, wildlife conservationists William L. Finley and Herman T. Bohlman camped in the Klamath Basin to photograph waterfowl traveling along the Pacific Flyway.  Hiking near the banks of the Klamath River, one of the photographers took this photo of a fishwheel, one of the most efficient fishing methods invented.

As early as 1829, fishwheels were used to catch and deposit fish with a minimum amount of human effort.  The first fishwheels were built for shad fishing on the Pee Dee and Roanoke rivers in North Carolina.  A fishwheel is strategically located in the swift current of a river and in the pathway of migrating fish.  The flowing waters rotate the wheel, which catches and then deposits the fish.  By the late nineteenth century, fishwheels were used extensively in the Pacific Northwest to catch salmon as they moved upstream to spawn.  Farmers with property located on swift rivers used fishwheels to harvest fish.  Some fishwheels were built on scows, or flat-bottomed boats, which enabled the farmer to relocate the wheel to the best fish runs.  On larger rivers, such as the Columbia, canneries and fish markets built fishwheels to take advantage of large fish runs and deliver a fresh product to their customers.

In 1926, Oregon outlawed fishwheels because they caught too many fish at one time.  The fishwheels, moreover, disrupted spawning, which is necessary to keep healthy fish populations.  Today, however, biologist and wildlife experts use fishwheels to study fish and spawning patterns.  Scientists endorse this collection method because it does not harm the fish and ensures their safe return to the rivers.