On the Trail near the Salmon River 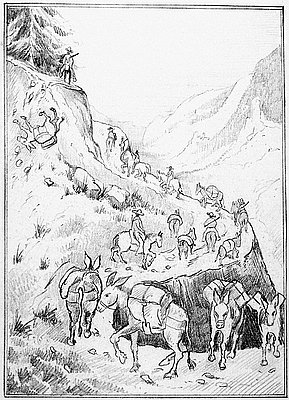 This sketch by Guy Howard depicts a pack train supplying the U.S. Army during the Nez Perce War of 1877. Guy Howard was the son and aid-de-camp of General Oliver Otis Howard, commander of one of the military divisions pursuing the Nez Perce Indians (Nimi’ ipuu).

War between the U.S. military and several bands of non-treaty Nez Perce began in June 1877. After receiving an ultimatum from General Howard that they must leave their traditional homelands and settle on the Nez Perce Reservation, band leaders White Bird, Looking Glass, and Chief Joseph agreed to the resettlement plan. However, while these groups were preparing to move to the reservation, several young warriors from White Bird’s Salmon River band attacked and killed a group of American ranchers. General Howard responded to this raid with military force and thus began the Nez Perce War, a 1300-mile retreat by the non-treaty bands. Facing superior numbers, the Nez Perce fought a skillful defensive campaign—accompanied by women and children—from eastern Oregon and north-central Idaho, across the Rocky Mountains and northward to within forty miles of the Canadian border. The larger Nez Perce contingent led by Chief Joseph surrendered to General Howard and Colonel Nelson Miles on October 5, 1877. White Bird and his band successfully crossed the border and reached the camp of the Lakota leader, Sitting Bull, who was also then seeking refuge in Canada..

The sketch, showing the pack train on the trail near the Salmon River (present-day north-central Idaho), illustrates both the rugged terrain of the Nez Perce War, and the logistical and tactical problems that plagued the U.S. Army throughout the conflict. Faced with defending themselves against military aggression, the non-treaty Nez Perce demonstrated tremendous resolve and continually outmaneuvered the various army contingents that were pursing them from different directions. As reported in the American newspapers, the U.S. military appeared ineffectual, an outright American victory uncertain. General Howard’s army had difficulty keeping pace with Chief Joseph’s band. Colonel John Gibbon’s group, dispatched from western Montana, was defeated at Big Hole and had to abandon the pursuit. The Nez Perce also repulsed an attack by the cavalry column commanded by Colonel Samuel D. Sturgis. Despite these military successes, Chief Joseph’s band was finally cornered at Bear Paw Mountain in Montana by Colonel Miles. Facing a sustained siege with little chance of escape or re-supply, Chief Joseph agreed to surrender in order to spare the women and children and the wounded.