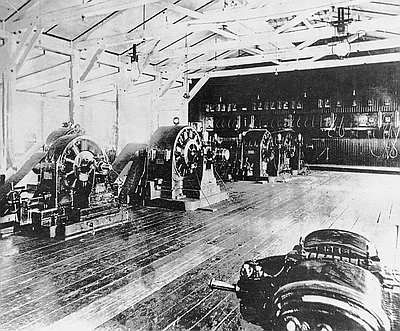 This photograph shows the interior of the powerhouse at Willamette Falls Electric’s Station A, one of the nation’s first hydropower plants, located at Willamette Falls in Oregon City. In 1889, the Willamette Falls Electric Company successfully transmitted d-c (direct current) electrical power from Oregon City fourteen miles to Portland.  In 1890, the same company repeated a similar feat by transmitting a-c (alternating current) electrical power between the same two locations.  The date originally given to this photograph is inaccurate, since the first Westinghouse dynamos—the generators visible in the photograph—which produced the a-c power, were not delivered until the spring of 1890.

Originally incorporated in 1888, following a merger between the U.S. Electric and the Oregon City Electric companies, the Willamette Falls Electric Company became a brief leader in the production and distribution of electrical power for both industrial and residential needs.  Soon after the successful transmission of electricity from Oregon City to Portland, the company was reorganized to allow for construction of a second power plant at the falls, creating Portland General Electric (PGE) in 1891.

When the Willamette Falls Electric Company sent electricity north to Portland, they were hoping to capitalize on the desires of approximately 40,000 people living there for the lifestyles and living environments afforded by substantial supplies of electrical power.  However, until the 1920s, residential uses were limited to little more than household lighting.  In the first decades of electrical power, most homes had no electrical wiring at all.  Of those that did, the wiring was usually installed specifically for fixed lights in the ceilings.  If the same home then bought an electrical appliance, like an iron or washer, the light often had to be unscrewed in order to power it.

Commercial demands for power increased in the early 1890s largely due to the conversion of horse-powered trolleys to electrically-driven ones.  To meet the demand, PGE’s second power station in Oregon City, housing five more generators, came online in 1895. By then, PGE’s electricity was being used to power the nation’s first interurban electric railway, traveling between Portland and Oregon City. Other industrial markets opened up as well, especially since long-distance transmission technology allowed industries to easily locate within PGE’s reach.  More power plants followed, constructed and expanded to keep pace with the ever-rising energy demands of the Pacific Northwest.

Just as the railroad network expanded the scale of Portland’s economy, new technologies for moving people around the city, spanning rivers, and erecting multistory buildings expanded the scale of urban living. Electrified street railways extended the distance people could travel in thirty minutes from two to ten miles or more. …

This 1867 photograph, taken by Carleton Eugene Watkins, shows Oregon City and the Willamette Falls soon after the first portage railroad was built there. Oregon City had been incorporated in 1844 and was the first official city established west of the Rocky Mountains. The earliest non-Native settlers near Willamette Falls were …