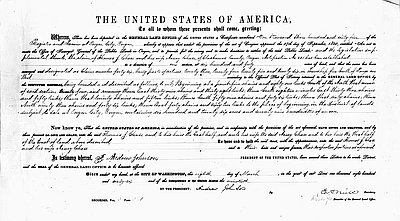 This image shows a certificate issued March 8, 1866, that grants 640 acres of land in Clackamas County to Thomas J. Chase and his wife, Nancy. The document cites the Donation Land Act of 1850 as the basis for the United States General Land Office patent. The act, which was signed into law by President Millard Fillmore on September 17, 1850, drew settlers to Oregon by the thousands. By the time the act expired on December 1, 1855, settlers in Oregon had filed for 7,437 patents that covered more than 2,500,000 acres of land.

Under the terms of the act, white and “half-breed” Indian male settlers over the age of 18 who were citizens or expressed the intention to attain citizenship on or before December 1, 1850, and who could also show that they had lived on and cultivated the claim for four consecutive years, were eligible to make a claim for a 320-acre parcel. If the man were married, or should become married by December 1, 1851, the couple would qualify for an additional 320 acres. In this case, husband and wife would have title to their respective half section.

Anticipating that the U.S. government would implement such a law when it made Oregon a territory, the Provisional Government established in the Willamette Valley in 1843 moved to insure that existing settlers would be able to keep the land they already claimed in the region. It passed its own land grant legislation that allowed settlers to claim up to 600 acres (later increased to 640 acres). The Provisional Government’s actions were driven in part by the 1842 proposal by Missouri Senators Lewis Linn and Thomas Hart Benton that called for flooding the Oregon Country with American settlers to overwhelm the British, and to expand the United States to the Pacific Ocean. The key to this plan was to issue each male settler 640 acres of free land when he arrived in Oregon. Linn’s plan failed to win approval in Congress but it did influence the Land Act of 1850, and settlers poured into Oregon in much the same manner that Linn had foreseen.

There were negative elements to the Donation Land Law that had repercussions that are still felt today. By limiting the land grants to white and “half-breed” Indian settlers (50 percent Indian, fifty percent white), the law excluded Blacks, Hawaiians, Indians, and Asians from sharing in the bounty of Oregon. The racial exclusion laws created the foundation for a state in which racial diversity was rare, especially in rural areas. In addition, the presence of Native Americans on the land created complications for determining ownership. During the late 1840s and throughout most of the 1850s, intense efforts were made to get Indians to cede their lands to the United States and to settle the now displaced Native Americans on designated reserves throughout the state. The effects of both the racial exclusion and Indian removal are still being felt to this day.