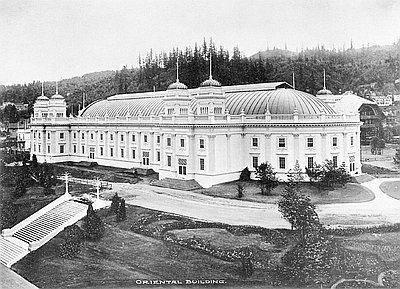 This 1905 photograph shows the Oriental Exhibits Palace, part of the Lewis and Clark Centennial and American Pacific Exposition, a world’s fair held in Portland from June to October 1905.

Emil Schacht, a prominent German-born architect based in Portland, designed the structure. Built in a Spanish Renaissance style, it had a grand entrance that was meant to resemble features of the Paris Exposition’s “Le Petit Palais des Beaux-Arts.” Measuring 308 x 160 feet, the Oriental Exhibits Palace was one of the first buildings to be erected on the fairgrounds. It was built for $55,425, a cost shouldered by the State of Oregon.

Although the balcony was set aside for displays from American schools and universities, most of the exhibits in the building were centered on the burgeoning trade relations between Asia and North America. More than half of the floor space was devoted to the Japanese exhibit. As one contemporary observer put it, the emperor of Japan, “not quite satisfied with the excellent showing made last year at St. Louis, gave his commissioners instructions to outdo what was done at the Louisiana Purchase Exposition.” Japan was a rising power at the time, and Japanese leaders wanted to make sure that their exhibit reflected that fact. The island nation spent approximately $1 million on their exhibit, which focused on traditional manufactures, including silk goods, porcelains, and finely crafted lanterns.

Merchants from twenty other countries also exhibited their wares. In addition to East Asian nations, a number of Middle Eastern countries also participated, including Persia (known today as Iran), Turkey, and Egypt.