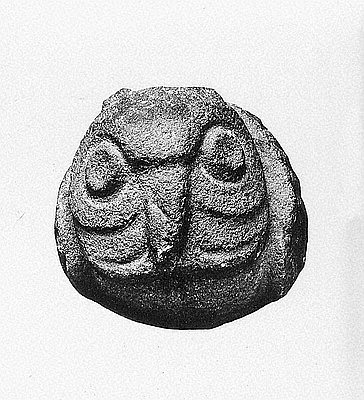 For thousands of years before Euro Americans arrived in the Pacific Northwest, the Multnomah Indians lived on Sauvie Island on the lower Columbia River. In 1805, explorers Meriwether Lewis and William Clark estimated that 800 Multnomahs lived on the eastern portion of the island. By the mid-1830s, malaria and smallpox had decimated their population. The Multnomahs are a Chinookan people, some of whom keep carved figures that represent their guardian spirits. In Native belief systems, birds and animals often represent guardian spirits that individuals obtain during youthful quests. Archaeological investigations near Sauvie Island have unearthed artistic sculptures, stone knives, human-worked animal bones, and Euro American trade goods such as copper and glass beads. Archeologists also discovered a large plank longhouse and thousands of skeletal remains of varied wildlife at a location known as the Meier Site, indicating that Multnomahs did not have to travel great distances to procure food sources.

DeVoto, Bernard. The Journals of Lewis and Clark. Boston, Mass., 1953.