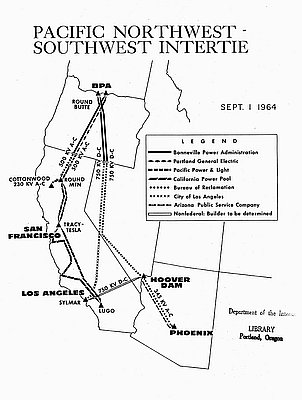 The idea for a high-voltage transmission line interconnecting the power grids of the Pacific West was introduced as early as 1919. Although the idea resurfaced in different forms over the years, it wasn’t until 1961, when Secretary of the Interior Stewart L. Udall, under the direction of President John F. Kennedy, assigned a task force to conduct a comprehensive study of a Pacific Intertie that plans for its construction began in earnest.

The task force, under the leadership of Charles F. Luce of the Bonneville Power Administration (BPA), reported back to Udall that the intertie should be built “at the earliest practicable time,” suggesting that the intertie could be built either by the federal government, non-federal public entities, private industry, or a combination of interests.  Private electrical utilities in California, however, resented the notion that an all-federal intertie could be constructed across their territories. To counter the threat of an all-federal project, Pacific Gas & Electrical Company, California Electric Power Company, San Diego Gas and Electric Company, and Southern Edison Company consolidated their efforts, forming the California Power Pool.

Worried that California interests were leveraging for a disproportionate share of energy produced by the Columbia River hydrosystem, politicians across the Northwest began pressuring Congress for the passage of a “regional preference” bill, guaranteeing that consumers’ energy needs in each region would have first priority to power before any surplus power could be transferred north or south.  Amid much wrangling—private power companies worried that regional preference would lead to an all-federal intertie—Congress finally conceded to the appeals of the Northwest’s representatives.  On August 14, 1964, Congress appropriated $45.5 million for construction to begin on the intertie, on the condition that regional preference be given to customers of each region.

Construction of the Pacific Intertie began in 1965 and was completed in 1970.  When finished, two 500 kilovolt a-c (alternating current) lines stretched approximately 940 miles from the John Day Dam on the Columbia River southward through the Central Valley of California, terminating at the Lugo substation near Los Angeles.  Another 800 kilovolt d-c line extended from the Celilo Converter Station, near the Dalles Dam on the Columbia River, arching southward through Central Oregon and Nevada before terminating at the Sylmar Converter Station near Los Angeles.  A third 500 kilovolt a-c line was added to the intertie system, coming online in 1992, extending from the Alvey Substation near Eugene, Oregon, south to the Tesla Substation near San Francisco.  Today the Pacific Intertie links together electrical systems from utilities in eleven states plus British Columbia, including the largest hydrosystem (BPA), the largest municipal system (Los Angeles), and the largest privately-operated system (Pacific Gas and Electric) in the United States.

Norwood, Gus. Columbia River Power for the People: A History of Policies of the Bonneville Power Administration. Portland, Ore.: 1981.