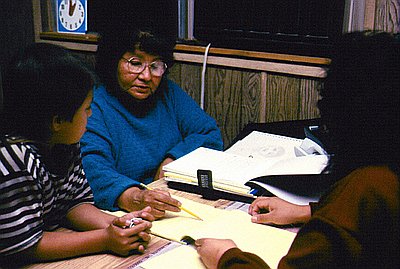 This photograph of Myrtle Peck teaching the Paiute’s language and traditional stories to her children was taken by Leila Childs in 1997. At the time, the Pecks were participating in the Traditional Arts Apprenticeship Program of the Oregon Historical Society Folklife Program.

As far back as Myrtle Peck can remember, her mother Marie Louie told her stories about the trickster Coyote and other animals–like the hummingbird that flew to the moon and the mother deer who painted her little fawn with spots. When she was older, her mother told her family histories. They described life for the Northern Paiute people before the first Anglo fur trappers came into the valley—a time when the Paiute traveled in nomadic bands. They were called the “Wadatika.” (translated as “wada seed eaters.”) Wada seeds were an important food source to the band that lived near the shores of Malheur Lake. It was common practice among the Pauite to identify bands by an important food source.

These are the stories that Peck shares with her own daughter. The stories are important but Peck says, “The most important thing for her to learn is our language.” Myrtle draws pictures and writes the words for Theresa to memorize. They record the stories in Paiute and English, and Theresa enters them into her computer. They also attend monthly “Elder’s Meetings” at the Burns Paiute Reservation where the Paiute language is taught. Theresa says, “I may be able to pass this on to my children, nieces, nephews, and grandchildren. I would like to keep this with me and not let the heritage of the Paiute people die. I will tell my kids and just carry it on.”