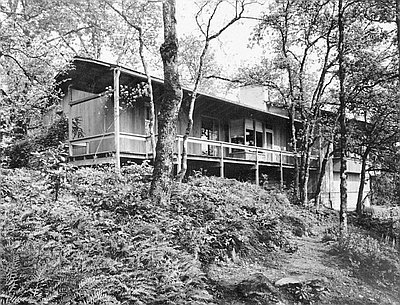 Architect John Storrs designed this garden-focused house in the Northwest Regional style for Peter and Laurie King Kerr. It was completed in 1959 on a site south of Portland along the Willamette River. This view looks upward at the back of the house, which has a covered balcony overlooking the river and a garden of native Northwest plantings, designed by Richard Painter.

The Northwest Regional style is often traced back to the work of A. E. Doyle, who designed several ground-hugging shingled beach cottages in the 1910s. In Oregon, it developed during the 1930s in the work of John Yeon, Van Evera Bailey, and Pietro Belluschi, among others; a good deal of similar design was done in the Puget Sound area as well. The style derives from efforts to design buildings that respond to the region’s environment and make good use of indigenous building materials. As the style developed, it drew inspiration from the mild marine climate of the Coast, Puget Sound, and the Willamette Valley, and from the cedar and Douglas fir found there.

Characteristics of the style include asymmetrical floor plans, expanses of glass that frame views and extend garden areas into the building, low-pitched gable roofs, and the extensive use of unpainted wood. The style reflects Asian influences such as an emphasis on integrating buildings with their site, as well as elements of the clean-lined forms of the International style>, usually seen as antithetical to the idea of regionalism.

Belluschi had worked in Doyle’s office, and in 1944, he designed a beach house at Gearhart in the Northwest Regional style for Peter and Laurie King Kerr. Influenced by hearing a talk by Belluschi on regional architecture, John Storrs (1920-2003) moved to Portland after graduating from Yale in 1949. In addition to his residential work, Storrs designed larger projects such as the Portland Garden Club (1956). Other noteworthy commissions included Salishan Lodge at Gleneden Beach (1965) and the Oregon College of Art & Craft (1979). On both of these projects, Storrs worked with landscape architect Barbara Fealy, who held similar values regarding the integration of indoors and outdoors, and of landscape with structure.