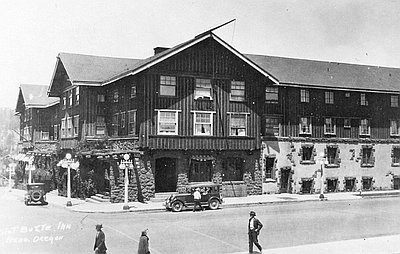 Pilot Butte Inn, a rustic sportsman’s lodge in the center of the sawmill town of Bend, is depicted in this photograph, taken about 1930.

The Pilot Butte Inn opened in 1917 on the banks of the Deschutes River in the heart of the growing town of Bend. Designed in the Craftsman style by architect John E. Tourtellotte of Boise, the inn made prominent use of local materials such as river rock and pine. The vertical board-and-batten siding and the plain gabled roofs and window surrounds suggested the plain bunkhouse lodgings of the lumber camp, but the interior accommodations were suitable for a resort.

Bend, a minor settlement established in the 1880s, began a rapid growth in 1904 when the Pilot Butte Development Company first platted and sold town lots. A railroad extension south from the Columbia River reached Bend in 1911, followed in 1916 by the opening of two huge sawmills, milling local pine for shipment by rail. Bend’s new neighborhoods were filled with houses in the Craftsman and Bungalow styles, and the design of the Pilot Butte Inn fit right in with its neighbors.

Constructed at the beginning of the age of automobile touring, the Pilot Butte Inn was both a destination for vacationers and a hotel for travelers. During the 1920s and 1930s, it was a headquarters for fly fishers who fished the Deschutes River and the many nearby mountain lakes. The inn was one of the few well-known accommodations in central Oregon, and it attracted a number of celebrity visitors, including Hollywood stars bent on recreation away from the limelight, and Eleanor Roosevelt, who was reported to have enjoyed a planked trout in the dining room.

A local and regional landmark, the Inn fell on hard times in the 1960s. Its visual prominence and historical importance caused it to be the first Deschutes County property to be placed on the National Register of Historic Places, in 1973. The distinction was short-lived, however, and the Pilot Butte Inn was abruptly demolished the same year.