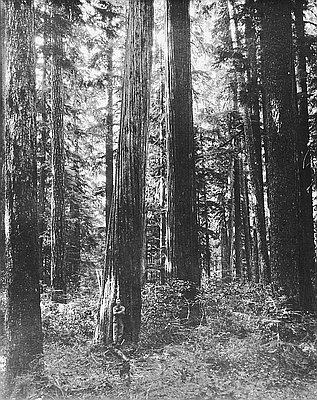 Port Orford cedars can live for hundreds of years. The largest living example, located in the Siskiyou National Forest, is more than 230 feet high and 12 feet in diameter, though even larger specimens existed before industrial logging began in the late nineteenth century. Some of their stumps, up to 20 feet across, can still be found.

The aromatic soft wood of Port Orford cedar has long been valued by Native peoples, who used it to build ceremonial houses and sweat lodges. The Hoopa Valley Tribe of northern California, for example, considers the tree central to their ceremonial life, referring to it as “the Healer.” The wood is also sought after by the Japanese, who use the wood for shrines, temples, and arrow shafts.

Because of its durability, beauty, and scarcity, Port Orford cedar is considered to be the most valuable wood harvested in western North America. A single mature specimen can fetch $50,000 on the market. Because of its high value, the great majority of mature trees have been logged off over the years.

In 1854, horticulturists began cultivating Port Orford cedar as an ornamental plant. It has since become a very popular landscape plant in both North America and Europe. In 1923, however, ornamental Port Orford cedars in Seattle began dying from an introduced root fungus, which spread to native stocks in the early 1950s. The U.S. Forest Service and other forest managers have undertaken strict measures in recent years to try to prevent the spread of this fatal disease.