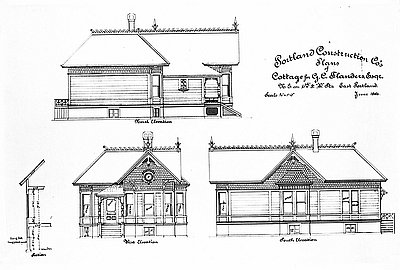 These plans for a modest urban cottage were prepared by the Portland Construction Company in 1888 for George C. Flanders. The house was built at 1826 6th Street in East Portland, at the time a separate city, on a lot that is today at Southeast 6th Avenue and Mill Street in Portland. A single-story wood frame building in the Queen Anne style with a basement and a decorative ridge top cresting, the Flanders family house contained a parlor, a dining and sitting room, a large kitchen, and two bedrooms. There was also an entry hall and a substantial pantry for food storage and preparation. The only indoor plumbing was a kitchen sink and a covered bath tub, also in the kitchen. There was an outhouse in the back yard. While electricity was rapidly becoming available, this house was not originally wired for it.

George C. Flanders was listed in the 1889 Polk city directory as a superintendent at the Standard Oil Company, which had its facilities on the Willamette River waterfront docks at the foot of Southeast Main Street, a few blocks from the Flanders house. The house was ideally located in a real estate development platted as the Stephens Addition to East Portland. It was three blocks from a streetcar line that crossed the river on the new (1891) Madison Street Bridge, and only a block from another new (1889) electric line that reached downtown over the Morrison Street Bridge and extended to the developing southeast streetcar suburbs. The house cost approximately $2,278 to build in 1888; it was torn down in 1932.

Thousands of cottages of similar size and design were erected in Portland and in numerous other Oregon cities and towns in the late 1880s and early 1890s, when many residential subdivisions such as Stephens Addition were platted and sold in the wake of the arrival of the transcontinental railroads. The Portland Construction Company was one of many firms that had ready-made plans which clients could accept or modify, and which could be built at modest cost. Real estate developers in this period specialized in land sales and were rarely involved in construction. Houses were built at different times by a variety of builders, which gives these subdivisions a diversity of building design. This pattern contrasts with subdivision development after World War II, when land and buildings were typically developed simultaneously by a single developer.