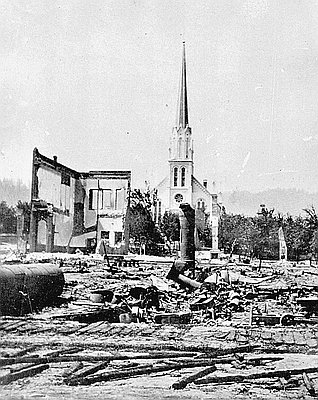 In the early hours of August 2, 1873, fire bells rang summoning the Portland volunteer firefighters to a fire that raged, according to newspaper accounts, “among the cottages of the poor and the elegant mansions of the rich.”  This view, looking west from Southwest Front Street between Madison and Jefferson, shows how narrowly the First Congregational Church escaped the flames.

After burning for more than twenty-four hours, the fire had consumed more than twenty square blocks of the city, including Chinese tenements and “metallic-”roofed brick buildings.  In addition to five fire companies from Portland, both Salem and Vancouver sent men and equipment into the fray.  The Salem company and its engine arrived by train while the Vancouver firefighters arrived in Portland aboard the Oneatta.  In an emotional victory, firefighters succeeded in saving the St. Charles Hotel, which the Oregonian called “the most magnificent structure on the northwest Pacific coast.”

The staggering losses from the fire, less insurance, amounted to over $925,000.  Judge Matthew P. Deady observed, after a somewhat smaller fire in December of 1872, that disorganized leadership prevented that fire from being promptly contained despite the valiant efforts of firefighters.  Planning and organization had not improved after the first fire: each company was still under the direction of a unit leader rather than being coordinated by a professional fire chief.  The only immediate official response was the purchase of a louder 4,000-pound bell.  Attempts to fund an improved water system were blocked in Salem by Portland legislators who did not want to raise taxes or increase city debt.