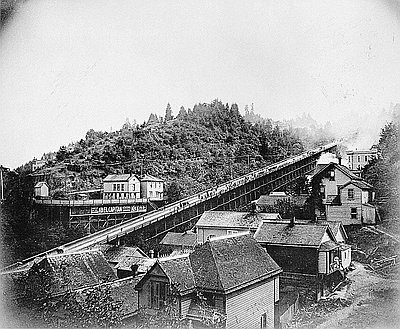 Cable cars appeared in Portland in January of 1890.  The first line ran from Irving Street, near Union Station, along 5th to Jefferson Street and along Jefferson past the Vista Bridge into Washington Park (formerly City Park).  It had a sideline from 5th and Alder to Front Street and another at Soutwest 18th up to Spring Street.  On the Spring Street segment, lay the line’s most impressive element, a trestle spanning one thousand feet.

The Portland Cable Railway Company was incorporated in 1887 to provide public transportation to the area west of the city.  The Portland Cable Railway line was modeled on San Francisco cable cars lines, which worked well in that hilly city.  Initial investments went to the purchase of real estate, and an intensive sales campaign followed since the only way to make the line profitable was to generate traffic along the route.

The line opened on February 22, 1890 after operators received a brief training from San Francisco workers.  The first accident on the line occurred just two days later.  When the car gained speed unexpectedly, the freshly trained crew jumped from the car in panic, leaving the three passengers to fend for themselves.  Luckily, the passengers escaped with only minor injuries.

Like horse drawn cars, the cable cars could operate in flood conditions, something that the electric cars, that eventually replaced them, could not do.