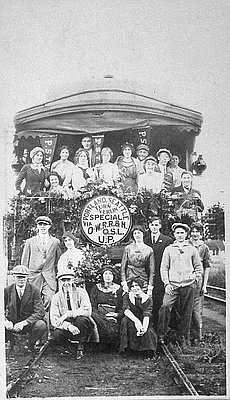 The Portland Turnverein was the local chapter of the German American athletic (gymnastic) association.  Turnverein, coined after the German word turnen, or physical exercise, was the name given to physical education clubs in Germany and the United States and members were subsequently referred to as Turners.  This 1913 photograph shows the Portland/Seattle Turnverein (P.S.T.V.) decorated railcar bound for the Denver Turnfest, the celebrated national gymnastics competition that hosted Turnverein gymnasts from across the United States and Germany to compete.

In addition to their focus on physical education and gymnastics, Turners served as a civic and social association and were involved deeply in liberal thought and a range of social issues.  The turnverein movement was brought to the United States by German political refugees in the late 1840s and Portland’s Turnverein opened in 1872 on the third floor of the New Market Theatre.  Here, Turners sometimes hosted events such as a post-parade Thanksgiving dinner for volunteer firefighters as they did in 1878.  The Portland Turnverein also supported Portland’s Gesangverein, or singing associations, which promoted the cultivation of German music, song, and culture among Portland’s German immigrant community.