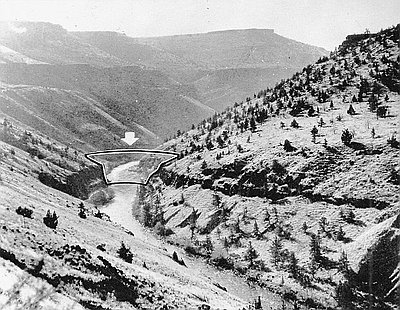 This photograph of the proposed site for the Pelton Dam accompanied a January 20, 1949, article in the Oregon Journal. The proposed dam site was within an 800-foot-deep canyon on the Deschutes River just northwest of Madras. Initially proposed by the Northwest Power Supply Company, by January 1950 Portland General Electric (PGE) assumed sole control over the project.

Sustained opposition to the Pelton Dam immediately followed its public proposal in January of 1949 and delayed licensing for construction until June of 1955.  Fishing interests, the driving force behind the opposition, argued that the dam would violate the spirit of the Lower Columbia River Fisheries Development Program (CRFDP) and undermine efforts to maintain a viable salmon and steelhead fishery in the lower stretches of the Columbia River Basin.  The CRFDP was designed to mitigate foreseeable damages to fish populations arising from the federal construction of dams on the mainstems of the Columbia and Snake rivers.  Proponents of the dam responded to the criticism by repeatedly pointing out that more power was needed in the region—immediately—to overcome a power shortage expected to last until the McNary Dam was finished in the mid-1950s.

In 1951, PGE expanded the Pelton Dam proposal to include $1 million for salmon mitigation and $3 million for the construction of a smaller reregulating dam, designed to stabilize water fluctuations resulting from the uneven flows passing through upstream turbines. On evaluation, the Federal Power Commission (FPC) granted PGE a federal license to proceed. However, the Oregon Hydroelectric Commission denied PGE a similar permit and the state of Oregon filed a petition in the Ninth Circuit Court of Appeals challenging the FPC’s jurisdictional authority over the Deschutes River. In 1954, the Court of Appeals sided with Oregon and invalidated the FPC permit, but a year later the U.S. Supreme Court reversed the lower court’s decision.

In 1956, while PGE pushed ahead with the Pelton project, Oregon senators Richard Neuberger and Wayne Morse co-sponsored legislation designed to revoke PGE’s permit.  At the same time, Oregon’s attorney general, Robert Thornton, sued PGE for constructing without a state permit.  That year, Senator Neuberger also introduced an amendment to a state’s water rights bill that would have revoked PGE’s permit to build the Pelton Dam.  In the end, none of the attempts to stop the Pelton project were successful.  Because PGE had located its project on the Deschutes River between land owned by the Confederated Tribes of the Warm Springs Reservation and land managed by the Bureau of Land Management and the U.S. Forest Service, the state of Oregon was denied the jurisdiction needed to stop the project.

This Les Orderman photograph of Wasco Chief Joseph McCorkle symbolically breaking ground for the Pelton Dam was originally published in the Oregon Journal, on May 2, 1956, in conjunction with an article, “Pelton Dam Rite Held,” written by Walt Mattilla.  Work on the dam actually began on April 18, …