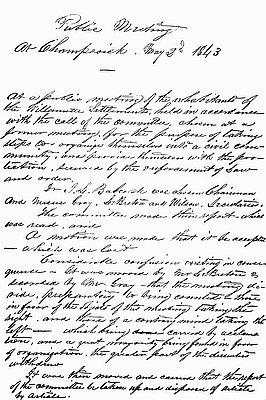 On May 2, 1843, Willamette Valley settlers met at Champoeg to vote on the formation of a provisional government. The minutes recorded by George Le Breton recount the vote in favor of the provisional government (which historians later estimated to be 52-50) and the subsequent appointments of settlers to fill the positions created at the meeting.

As the number of Euro American settlers living in the Willamette Valley increased over the course of the 1830s, so, too, did the recognition that some type of government would have to be formed. Attempts to establish a provisional government before 1843 were thwarted by intense factionalism among the settlers. The largest of these divisions was that which existed between the Methodist Mission, led by Jason Lee, and the Catholic Church, headed by Father Francis Blanchet. The religious underpinnings ensured that the settlers would be divided along cultural lines as well, with most Americans supporting the Methodist faction and the majority of the region’s French-Canadian population supporting that of the Catholics. Compounding the divide was the powerful regional presence of the Hudson’s Bay Company and John McLoughlin, who favored the Catholic position and opposed any increased power for the Methodists. The existence of these factions—each of which had its own internal divisions—created an environment in which compromise and agreement would prove elusive.

Despite the absence of a formal government, the early settlers of the Willamette Valley did appoint members of the community as legal decision makers when the need arose. In 1835 a criminal court was formed to hear the case of Thomas Hubbard, who was accused of a murder committed on Sauvie Island and in 1841 a probate judge was selected to handle the estate of Ewing Young, an ex-mountain man and cattle rancher who died without a will. This particular judge continued to hear probate cases until the provisional government was established in 1843.

Of the many meetings that were held to discuss the political status of the region, two in particular are considered especially important in influencing the establishment of a provisional government. The first of these meetings was held at the Oregon Institute, a school for white children in the Willamette Valley, on February 2, 1843, and the second was held at the home of Joseph Gervais on March 6, 1843. These “wolf meetings” were ostensibly held to discuss how to solve the problem posed by increasing attacks on local livestock by wolves, bears, and cougars. At issue was the establishment of a bounty system in which all residents would contribute to a general fund that would pay bounties for dead predators. An executive committee was formed to both collect and distribute what was essentially the first local tax. It was through the establishment of this committee that the seeds for an organized government were sown. Less than two months later, the majority of the region’s white, male settlers approved the formation of Oregon’s provisional government.

Dobbs, Caroline C. Men of Champoeg: a Record of the Lives of the Pioneers who Founded the Oregon Government. Portland, Ore., 1932.