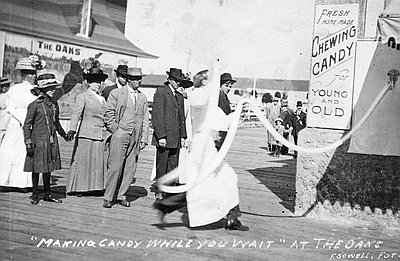 This photograph, taken by F. Sowell around 1912, shows Edward Klees pulling taffy at Oaks Amusement Park, one of the oldest continously operated amusement parks in the United States.

Oaks Park opened in Portland on June 1, 1905, the same day the Lewis and Clark Centennial Exposition opened just down the river. The Oregon Water Power and Railway Company built the park primarily to increase the number of passengers on their streetcars during the evenings and weekends, when business tended to be slow. The company also hoped to attract some of the nearly 1.6 million people who flocked to the 1905 Lewis and Clark Exposition, the first world’s fair on the West Coast.

The Oaks, as it came to be known, was built on a small strip of land on the east bank of the Willamette River near present-day Sellwood Bridge. Because of its location in an active floodplain, it was hardly an ideal site on which to build an amusement park, but it was centrally located on the Oregon Water Power and Railway Company’s streetcar line from downtown Portland to Oregon City. The scenic fifteen-minute ride from downtown became a popular part of the early Oaks Park experience.

During its first decade, the Oaks attracted an average of 300,000 visitors annually. Families enjoyed the park’s rides, listened to live music, ate freshly made candy, had their pictures taken, and went swimming and roller skating. Picnicking was also a popular pasttime, as was taking in one of the park’s many shows, which included trapeze acts, outdoor movies, and firework displays.

The Oaks hit hard times along with the rest of the nation in the 1930s, from which the park did not fully recover until the 1970s. Although all of Portland’s other amusement parks have closed over the decades, Oaks Park continues to entertain Oregonians of all ages.