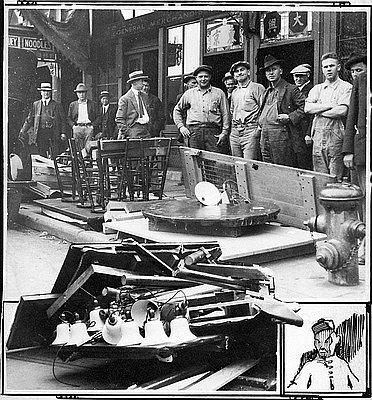 This photograph shows a group of unidentified men standing over confiscated gambling equipment following a July 25, 1922, raid on an illegal gambling establishment in Portland’s Chinatown. Portland law enforcement officials conducted a series of raids that year in response to renewed violence by Chinese gangs.

The early 1920s saw a renewed effort by Portland law enforcement officials to eliminate the three primary vices associated with the Chinatown area: gambling, prostitution, and opium dens. By far the largest and the most extensively documented of the raids on Chinese gambling parlors was that conducted by District Attorney Stanley Myers on April 6, 1922. Carrying 59 search warrants and leading a combined force of Portland police, sheriff’s deputies, local firemen and even city commissioners, Myers and his force descended upon Chinatown in broad daylight wielding sledgehammers and axes in a search of illegal lottery and gambling parlors. The raid was a response to a tong killing that had occurred in Chinatown just days earlier

Tongs were secret Chinese societies that competed with each other for control of such vices as gambling, prostitution, and opium dens. It was not unusual for rival tongs to resort to violence and the encounters often turned deadly. On February, 17, 1917, a particularly large and brutal tong battle that left several people dead erupted in Northwest Portland. It was in an effort to control this intra-ethnic violence that officials agreed to call a halt to their raids in return for a cessation of tong violence.

The Myers raid was but one of several that were covered by the city newspapers during the year and the archives of the Oregonian and the Oregon Journal feature numerous articles about the raids, many of which are accompanied by photographs. One follow-up article showed District Attorney Myers burning truckloads of confiscated materials at Kelley Butte. Both papers exhibit distinct differences in the tone of the coverage. The Oregonian’s coverage is serious, while the Oregon Journal downplays the incident, making light of the fact that only one Chinese man had been arrested in the course of the raid.

There are two points that should be noted about this image. First, it is a composite of two separate photographs, one of which has been cropped and pasted to the bottom of the other to make the pile of confiscated goods look bigger than it actually was. The second alteration is the inclusion of a small pen-and-ink drawing of a sinister looking Chinese man at the bottom right-hand corner of the image. This looks to be a part of the stylized frame that was drawn around the larger composition, a standard practice in newspapers of the era.