Reply to Questionnaire on Interracial Practices in the YWCA 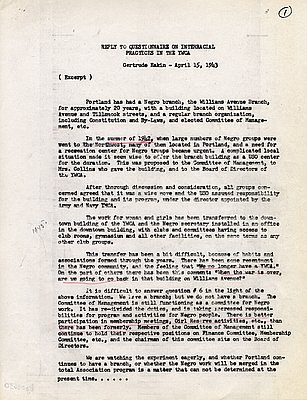 In 1943, the National YWCA asked officials of YWCA associations in different cities to answer a questionnaire regarding interracial policies, programming, and participation levels. In this document, General Secretary Gertrude Eakin of the Portland YWCA Association answers a question regarding joint participation among African Americans and whites on YWCA's membership committee in Portland. Her response indicates some successes and challenges to integration, which was taking place in the Portland YWCA during the 1940s.

The YWCA of Greater Portland was founded in 1901. By 1920, at the prompting of Portland's African American community, a separate YWCA branch for African American women was established and, by 1926, was thriving in an attractive new building on the corner of North Williams and Tillamook streets. One goal of the small segregated branch was to build self-confidence and ethnic pride among the women in the surrounding neighborhood, where the majority of Portland's relatively small population of African Americans lived.

The need for the Williams Avenue YWCA sharpened as the Second World War attracted thousands of African American employment seekers to Portland, increasing the African American population tenfold. The sudden demographic change escalated racism and discrimination in the city. When the United Services Organization (USO) searched for a segregated facility to serve the recreational needs of African American servicemen during the war, the YWCA rented the Williams Avenue building to the YMCA and opted to relocate the segregated Williams Avenue branch to the YWCA headquarters downtown, where it had access to the same facilities and resources as the white branch. That chain of events launched the "experiment" to which Eakin refers in her questionnaire response. At the time, National YWCA was interested in adopting policies of integration and encouraged local associations to follow suit.

In 1944, the Portland YWCA restructured the organization to eliminate segregated branches. After the war, the Williams Avenue building reopened as a YWCA center with programming and administration overseen by department committees and directors of the central organization. The move toward integration met mixed reviews and suffered from lack of direction. Eakin's document described the reservations held by the African American community. In 1945 Program Director Marjorie Jackson noted that the reverse was also true: "Because of group and personal insecurity, some of the Caucasian girls refuse to continue in clubs with other racial groups." During the 1950s, the center continued to be plagued by lack of staff and financial support, despite the efforts of a committed group of African American women advocates. The center closed in 1959, and the building was sold.

Schechter, Patricia A. A World of Difference, Portland Women of the YWCA 1901-2000. http://womhist.alexanderstreet.com/portywca/intro.htm (accessed September 24, 2007).