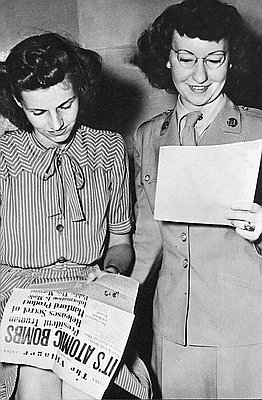 On August 6, 1945, President Harry S. Truman made a radio announcement informing listeners that the United States had dropped an atomic bomb on Hiroshima, Japan.  Described by Truman as “the greatest achievement of organized science in history,” the development of the atomic bomb gave new cause for the Japanese to surrender unconditionally to Allied forces. If they refused, Truman warned, “they may expect a rain of ruin from the air, the like of which has never been seen on this earth.”  True to his word, Truman ordered the atomic bombing of Nagasaki on August 9th. The Japanese government began negotiating terms of surrender almost immediately thereafter.

During his August 6 announcement, Truman acknowledged that the atomic bomb was developed at several sites in the United States, including the Hanford Engineer Works near Richland, Washington.  That same afternoon, the Richland newspaper, the Villager, released a special one-sheet “extra” edition that gave Hanford employees their first official description of the top-secret work that they were involved in.  The headline read: “It’s Atomic Bombs.”  Until that day, most Hanford employees knew only that they were working on a project immensely important to the war effort.

Development of the Hanford Engineer Works was overseen by the U.S. Army Corps of Engineers’ Manhattan Engineer District, but its construction, beginning in 1943, was carried out by the E. I. du Pont de Nemours and Company.  Du Pont also built the nearby town of Richland to accommodate a population of 17,000—mostly Hanford employees and their families. Du Pont signed a contract with the federal government that limited their profits to $1 for the duration of their involvement in the project, which lasted until 1946, when du Pont transferred their role in Hanford’s continued operations to General Electric.

The first batch of plutonium produced at Hanford was sent to Los Alamos, New Mexico in January of 1945, where it was subsequently used to build the world’s first atomic bomb, detonated during the Trinity Test in Alamogordo, New Mexico, that July.  By the end of 1945, Hanford had produced 266.2 pounds of plutonium, enough to fuel nineteen bombs the size of the one dropped on Nagasaki.

The atomic bombings of Japan ushered in a new era marked by contradictory feelings of fear and hope.  On the one hand, the new technology contributed to the termination of WWII and offered—at least for a very short time—the possibility of deterring future wars.  Nuclear power also offered promise in its potential for peacetime applications, particularly energy production.  On the other hand, nuclear powered weapons increased the potential for mass destruction on a worldwide scale.