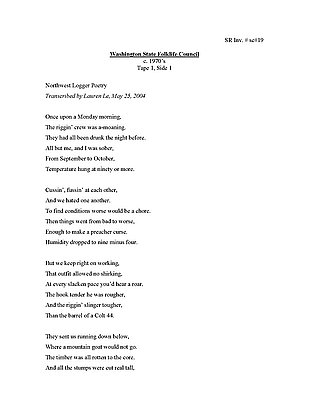 Rigging Slinger's Revenge, a parody of Edgar Allen Poe's famous poem, 'The Raven,' was written by Lon Minkler in the 1970s and recorded in 1986 by the Washington State Folklife Council Project as part of a larger effort to record logger poetry.

According to Lon Minkler, the poem is an adaptation of a tall tale told by co-worker Ivan Bailey, in response to a rookie logger’s query, “Have you ever seen death in the woods?”  Bailey, a consummate joker, weaved a tale in response that blended truth with hyperbole.  According to Minkler, a crewmember had in fact recently been killed by a logging accident, which was what provided the young “greenhorn” with his job opening.  But, the carnage described in the story was an exaggeration purposefully added for the benefit of scaring the young logger.

Death and injury have always been one of the risks that loggers confronted.  But, with the advent of high-lead logging, where trees were “yarded” from a logging site to waiting trains or trucks with the aid of an overhead rigging system, dangers increased significantly.  The presence of partially-suspended logs, constantly in motion across work sites raised the risk of accident and injury to logging crews.  So, too, did the increase in the work tempo, since employers’ expectations of work efficiency and production speed increased in step with new transportation techniques in the logging industry.

This “specimen” of the “Four-L Pledge” was originally devised under the leadership of the U.S. War Department’s Col. Brice P. Disque as part of a larger strategy to bring closure to a region-wide strike in the lumber industry in 1917. The strike threatened spruce production for the Allied war effort.  …