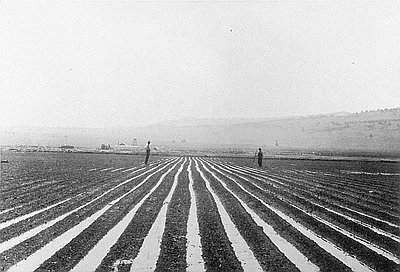 This 1928 photograph shows two men standing in an irrigated alfalfa field at Parks Ranch in the Fort Rock Valley, located in central Oregon’s high desert. The Fort Rock Development Company, founded by Henry M. Parks, used this photograph to promote farming in the valley. Parks, a geologist who had been the dean of Oregon State University’s School of Science and Engineering, dreamed of transforming the arid sagebrush lands into an agricultural paradise. He believed there was an abundant source of water under the ground that could be tapped for farming. He used rill irrigation and ran water from a well into ditches between crop rows. Today, rill irrigation is considered to be inefficient and a cause of soil erosion.

Between 1906 and 1912, when rainfall was higher than usual, families, single men, and a handful of single women used the federal Homestead and Desert Land acts to claim government land in the Fort Rock Valley. Many believed that a railroad would eventually connect the area to a state-wide transportation system, but that never happened. Most settlers left their land after several years because of alkaline soil and inadequate water. Others left after the already dry valley went into a drought lasting from 1918 until 1945.

By the late 1930s, farming and ranching had caused extensive soil erosion and dust storms in the Fort Rock Basin. The federal government determined that farming was not practical in the valley and bought out the settlers, returning their land to the public domain.

The Parks family moved to the Fort Rock Valley in 1928 and used several abandoned buildings to make their home. They grew alfalfa and grazed livestock near Hayes Butte, one of few areas in the basin where effective well irrigation was possible. Three generations of the Parks Family farmed there with limited success.