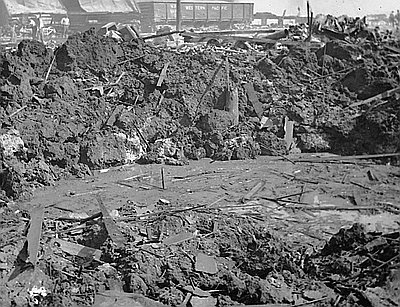 This photograph of the crater created by the “Roseburg blast” was taken in the days following the accidental detonation of 6.5 tons (13,000 lbs.) of explosives on August 7, 1959.  The blast blew a hole in the ground approximately 52 feet wide and 20 feet deep.

On the night of August 6, 1959, George Rutherford of Chehalis, Washington drove a Pacific Powder Company truck loaded with 2 tons of dynamite and 4.5 tons of nitro carbo nitrate into downtown Roseburg.  After scheduling his first delivery for the following morning, Rutherford parked the truck in front of the Garretsen Building Supply Company, near the corner of Oak and Pine Streets, and retired for the night at the Umpqua Hotel.  During the night, the Gerretsen building caught fire.  Alarms were sounded across the downtown shortly after 1:00 A.M., and within minutes firemen arrived on the scene to put out the blaze. Unfortunately, the explosive-laden truck remained unnoticed by both onlookers and firemen alike until just moments before it detonated.

The explosion and the ensuing fire destroyed all of the buildings within an 8-block area and did heavy damage to structures throughout the surrounding 30 blocks.  Fire crews from Eugene and Springfield responded to Roseburg’s call for immediate aid, and by nightfall, National Guard units from Roseburg and Cottage Grove cordoned off the worst-hit 30-block area from public access to deter looting.  The blast led to the deaths of 14 people and injured another 125.  The damages to the city were estimated to be between $10,000,000 and $12,000,000.

In the months following the blast, city leaders entertained the idea of rebuilding Roseburg’s downtown as a showcase for the wood-products industry.  Richard Neutra, a famous architect even agreed to provide Roseburg with a master plan to redevelop the devastated 8-block area, but the failure of the city to qualify for federal urban renewal funds squelched the idea.  Luckily, 98 percent of the downtown’s businesses had insurance plans that covered damages resulting from both fires and explosions, and were not dependent upon outside aid to recover their losses.  While Roseburg’s businesses rebuilt, city leaders capitalized on the opportunity to improve traffic flow by obtaining parcels of land near the blast site to allow for the construction of a new bridge across the South Umpqua River into the downtown.

Investigations by the Interstate Commerce Commission into the blast faulted both Rutherford and the Pacific Powder Company for parking their truck in a “congested area” and leaving it unattended—something they were warned against just two days prior to the accident. Civil damages amounting to approximately $1,200,000 were awarded to victims of the blast in March 1962, but criminal proceedings found the company innocent. At the time, laws concerning the transportation of explosives pertained only to common carriers and did not regulate privately contracted deliveries.