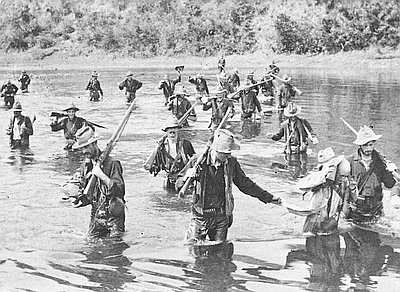 This photograph shows Company I of the Second Oregon Volunteer Infantry Regiment crossing a river (identified as either the Quinqua or the Norzagaray) in the Philippines during the spring of 1899. The Second Oregon was one of the first infantry units to be sent to the Philippines after the onset of the Spanish-American War in 1898.

The Second Oregon found itself ill-equipped to handle tropical conditions when the unit arrived in the former Spanish colony in June 1898. Their uniform, for example, featured a heavy blue flannel shirt topped by an even heavier flannel jacket. In May 1899, Lt. George Tefler complained that “although we have been a year in service” the War Department still “has not been able to furnish a uniform suitable for service in the tropics.” Some men bought their own clothing locally; pay, however, was erratic at best. Tefler remarked that “our men are paid when convenient—not oftener than once in two months.”

Many of the volunteers also complained about their rifles, obsolete single-shot Springfields that were only slight improvements over the rifles used in the Civil War. A volunteer from Eugene described them as a “clumsy black powder weapon” that only a “few old-time guardsmen had ever fired.” The regular army was equipped with the more modern bolt-action Krag-Jorgensens, while many of the Filipino soldiers were equipped with Mausers, which were superior even to the Krags. In the spring of 1899, a number of the volunteers, including some of those shown in this photo, were issued Krags.

Rations were probably the subject of the most complaints. Canned products were one of the staples of army food at the time, but much of it was substandard in quality. Canned beef and salmon had particularly nasty reputations. Rather than suffer army rations, many men preferred to buy food from the locals in Manila. While in the field the volunteers sometimes “foraged,” sweeping through the villages and taking chickens, pigs, ducks, eggs, and fruit.

By far the biggest problem of waging war in the tropics was disease. Malaria was one of the worst killers, but dysentery, measles, typhoid, venereal diseases, and smallpox also took their toll. More than two-thirds of the Second Oregon’s sixty-one fatalities died from disease.

Despite these many problems, the Oregon volunteers proved to be a relatively effective fighting force. After their return to the U.S., one of the generals who commanded the volunteer forces remarked that the Second Oregon’s “gallant conduct…reflected credit upon the state from whence they came.”

McEnroe, Sean. “Painting the Philippines with an American Brush: Visions of Race and National Mission among the Oregon Volunteers in the Philippine Wars of 1898 and 1899.” Oregon Historical Quarterly 104, 2003: 24-41.