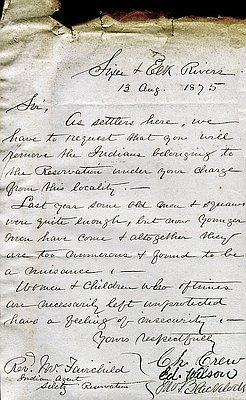 This letter is indicative of the hostility that some early settlers had for Native people. A band of Athapaskan Indians, known as the Kwatami, lived near the Sixes and Elk rivers in the southwest corner of what is now the state of Oregon. The Kwatami were a coastal people who traditionally engaged in trade and warfare with other Native groups. The Athapaskans harvested plants and animals in a seasonal cycle, fishing in rivers for salmon in the fall, hunting game in the winter, gathering seagull eggs and yellowjacket grubs in the spring, and collecting roots and berries in the summer. Euro-American miners moved into Athapaskan land in the early 1850s after gold was found in the area. Throughout southwest Oregon, miners shot at Indians, burning their lodges, and even took hostages. The result was the Rogue River War of 1855-1856, which ended with most of the region’s Indians confined to a coastal reservation, where many died of disease and starvation.

Native leaders made treaty agreements in 1855 with Superintendent of Indian Affairs Joel Palmer, but the treaties were never ratified by Congress. In 1865, the government broke up the coastal reservation, leaving two smaller reservations. In 1875, the government closed the southern reservation, Alsea, and reduced the size of the northern reservation, Siletz. A small population of southern coast Indians resisted being confined to reservations, where food was often scarce, and attempted to continue their subsistence lifestyles in their traditional homelands.

The United States 10th Census reported that a total of 301 Indians lived in Coos and Curry counties in 1880. Those who lived on the Siletz reservation lost more land when Congress passed the 1887 Dawes Act, which alloted portions of reservation land to individuals and sold the rest. The Siletz Indians lost their remaining reservation in 1956, when the government terminated the tribe and sold their land. In 1977, the Siletz tribe was restored, and it now owns about 4,000 acres of land. In 1984, the government recognized the confederated tribes of the Coos, Lower Umpqua, and Siuslaw, who now have a six-acre reservation.