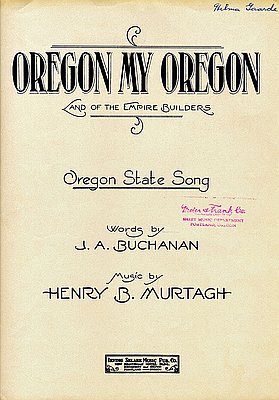 In 1920, John A. Buchanan and Henry B. Murtagh won an Oregon state song contest state with their entry, Oregon, My Oregon. The Society of Oregon Composers, which sponsored the competition, then planned a campaign to promote the song around the state through performances of all-male and all-female quartets at schools, universities, and public gathering halls. The State Superintendent of Public Instruction also endorsed the song. In 1927, the Oregon State Legislature officially selected Oregon, My Oregon as the state song. Buchanan, an Astoria city judge, wrote the words and Murtagh, a professional musician, composed the music. Many Oregon youth learned the song in their grade school classes.

The lyrics of the song glorify Oregon as the “land of the empire builders” that was “conquered and held by free men.” The song also refers to the state as a place of health and vigor that is “blest by the blood of martyrs.”