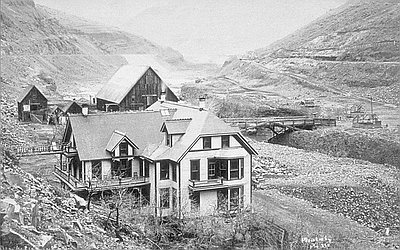 This photograph, taken around 1909, shows the bridge, hotel, and other buildings at Sherar’s Bridge in Wasco County. Sherar’s Bridge originally spanned the Deschutes River below Tygh Creek.

The bridge was located within the traditional territory of the western Sahaptins known collectively today as the Tygh people. The local waterfall, Sherar’s Falls, was a long-time fishing site for resident Indians from the village of Tilxni. Perched on wooden platforms, the Natives would dip-net for salmon and steelhead en route to their spawning beds. When Peter Skene Ogden, Chief Trader of the Hudson’s Bay Company, visited the site in late September 1826, he noted the presence of twenty families and a slender wooden bridge across the Deschutes. However, in the early settlement period of the 1840s and 1850s, there was apparently no bridge spanning the river and as a result, local travelers relied on Native ferrymen to ford the Deschutes.

In 1860 settler John Y. Todd built a bridge at the site, but it had to be rebuilt in 1862 after being washed away. The bridge subsequently changed hands several times before Joseph Sherar purchased it in 1871 for $7,040. He later spent another $75,000 on road improvements to the bridge. Much of this work was performed by local Indian laborers. Over the next several decades, Sherar and his wife, Jane (née Herbert), operated a successful stagecoach station at the site. This included a hotel, a livery, and shops. During the 1860s and 1870s, Sherar’s Falls was an important stop on the toll road leading to the mining fields of Eastern Washington and Eastern Oregon.

Joseph Sherar died in 1908, and within a few years Sherar’s Bridge declined in importance following the construction of rail lines in the Deschutes canyon. In fact, this photograph depicts the railroad grade on both side of the river. Deschutes County purchased the bridge in 1912 and it thereupon became a public thoroughfare. Sherar’s original hotel had several owners before it was destroyed by fire in 1938. Today modern travelers use a concrete bridge on Oregon Highway 216 to cross the Deschutes River at Sherar’s Bridge. For those who tarry at the site, a glimpse into the Native history of the place can be seen in the ancient petroglyphs carved into the rocks nearby.