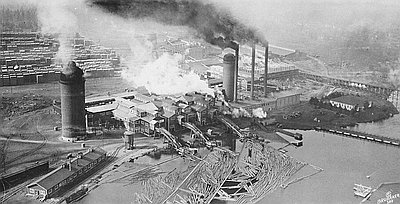 In 1916, the Shevlin-Hixon Lumber Company built a mill on the Deschutes River in Bend and began heavy cutting on more than 200,000 acres of company-owned ponderosa pine forest. The same year, another Minnesota-based company, Brooks-Scanlon Lumber Company, built a competing mill on the opposite side of the river. Soon, each mill was producing around 200 million feet of lumber a year. Bend’s population jumped from 536 in 1910 to 5,414 in 1920. By 1930, the city’s population was 8,821 and unemployment was low.

The companies did not practice sustainable harvesting and continued producing at full capacity. Both continued to buy more of the region’s timberlands to feed mill production. They ran several work shifts daily and regularly updated their technology and capacity. In 1937, the Bend Chamber of Commerce determined that the city would face severe economic depression if sustainable forestry was not practiced. By the early 1950s, the forests were depleted and the large mills shut down. The remaining smaller mills turned to making plywood, particle-board, and molding.