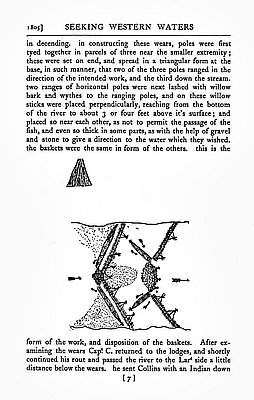 This excerpt from Meriwether Lewis’s journal describes a Lemhi Shoshone fish weir on present-day Idaho’s Lemhi River, a tributary of the Salmon River. After months of travel the Corps of Discovery had finally made their way across the Continental Divide and were descending the Lemhi Valley in search of a route to the Columbia River. On August 21, 1805, a party led by William Clark came across a Shoshone camp consisting of about seven families. The Indians received the strangers warmly, and after being regaled with salmon and chokecherries, Clark visited their weir, a fencelike structure designed to catch fish. In the excerpt reproduced here, Lewis describes how the Indians built the weir, and how it functioned to trap fish going both upriver and downriver.

Fish were an important component of the diet of the Northern Shoshone peoples living along the Salmon River and its tributaries. Game was scarce in the mountains where they lived and hostile groups to the east armed with firearms prevented them from hunting buffalo on the Plains. The Lemhi Shoshone took trout and other resident fish throughout the year, but the seasonal runs of salmon made the greatest contribution to their subsistence.

Weir technology was widespread throughout the Great Basin, Plateau, and Northwest Coast culture areas. Freshwater weirs like the one described here were located on small and medium sized streams. Coastal weirs were built along the margins of estuaries and were designed to work with the tides to catch herring, salmon, smelt, flounder, and other fish. The remains of many of these structures have been found on the Oregon coast, some more than 2,000 years old.

Whether coastal or inland, weirs were often cooperatively built and maintained. Among the Nez Perce, for example, traps and weirs were built by kinship and village groups and were regulated by task leaders who distributed the harvest to the community. Weirs allowed Native peoples to closely monitor salmon fisheries, shaping their harvests in response to annual variations in run size and the demands of upriver communities.