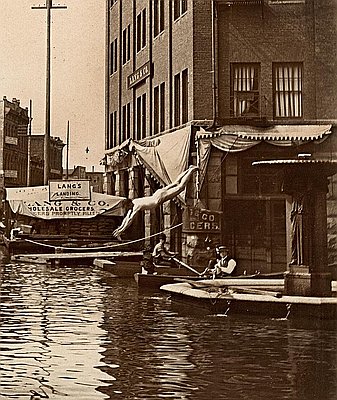 This photograph shows an unidentified man diving into waters surrounding the Skidmore Fountain during the Willamette River flood of 1894. The fountain, located at the intersection of First and Ankeny streets, was designed by sculptor Olin Warner and dedicated on September 22, 1888. Local beer distributor Henry Weinhard offered to fill the fountain with beer for the dedication ceremonies. His offer was declined, but the story remains a favorite local legend.

Upon his death in 1883, Stephen G. Skidmore, a successful and highly regarded businessman in Portland, bequeathed $5,000 for a fountain to provide drinking water for humans, horses, and dogs. His business partner Charles Sitton and Skidmore’s friends Henry Failing and Tyler Woodward donated the remainder of the $18,000 required to build the fountain.

The Portland City Council appointed a Fountain Committee in August 1885 to implement Skidmore’s bequest. Portland lawyer C.E.S. Wood was named to the committee for his artistic talents as well as for his associations with artists in New York. Wood recommended the work of his friend Olin Warner.

By the late 1870s, Warner was considered among the elite of American sculptors. Work on the Skidmore Fountain commission brought Warner to Portland in 1886 and 1888. He also spent extended stays in Oregon between 1889 and 1891, during which time he sculpted likenesses of Nez Perce Chief Joseph, C.E.S. Wood, and others. Warner designed the fountain with Skidmore’s request in mind. The fountain has three tiers of cascading water: a lower tier for dogs; a middle tier for horses; and a top tier for people.

At the time of the placement of Skidmore Fountain, First Street was a main thoroughfare, and the fountain was the centerpiece of a thriving business community. This location was also the center of Skidmore’s childhood and former business operations.

By the 1890s, as the center of the city’s business activity shifted to the southwest, the area around the fountain became a warehouse district. Only eight years after the fountain was installed, some community members discussed moving the fountain to a more fitting location; similar discussions surfaced again in the late 1920s as the district increasingly deteriorated. In May 1962, the “Skidmore Fountain Plaza” was dedicated as part of the city’s revitalization efforts. In the early twenty-first century, the fountain and surrounding area continue to serve as the heart of Portland’s Saturday Market.

The nearby City of Portland Fire Station One honors Stephen Skidmore on the fountain side of its brick building. Skidmore came to Oregon in 1850 with his parents when he was 12 years old and started working shortly after arriving in town, serving as one of the first “carriers” for the newly-established Oregonian newspaper. He launched his own druggist business in 1867. Skidmore was a long-serving member of a volunteer fire company and served on the Portland City Council from 1875 to 1878. In 1878, Skidmore was selected by Governor Chadwick to serve as one of the state’s representatives at the Paris World’s Fair.

In 1882, Skidmore began to suffer increasingly from a longstanding lung ailment. He spent the last year of his life on extended travels and died in San Rafael, California, on June 18, 1883. Skidmore was buried in Portland’s Riverview Cemetery.

In late May and early June of 1894, the Willamette River rose well above 30 feet, flooding the central business district of Portland.  The water remained for days, inspiring some Portlanders to accept the situation with the humor as displayed in this shot of “hunters” taking aim at decoys floating …