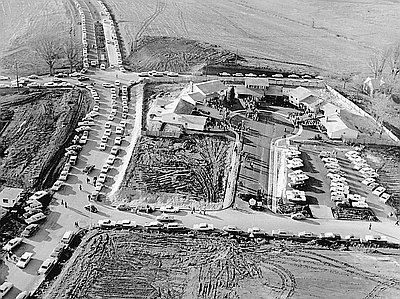 This aerial photograph shows the first five model houses at the grand opening of Somerset West, “planned $500 million ‘satellite city’ 10 miles west of Portland,” according to the Oregon Journal of December 3, 1963. An estimated 2,800 automobiles stopped during the Sunday opening.

Somerset West was sited on the rolling farmland of the Tualatin Plains just north of US Highway 26, the Sunset Highway leading west to Seaside. The developer was Centex Corporation, a company founded in Dallas, Texas, in 1950 that is today “one of the nation's premier companies in building and related services,” according to its web site.

Portland’s suburbs expanded rapidly after World War II. Among the first wave were developments at Cedar Hills, near the historic community of Cedar Mill a few miles west of Portland. Cedar Hills consisted primarily of middle-class single-family houses located on curvilinear streets, but included some rental apartments as well as a comprehensive shopping center. Later projects such as Somerset West were exclusively single-family houses, designed for upper middle-class family homeowners.

Until city zoning regulations began to be enacted in the 1920s, property owners and developers had great latitude in how they could use the land. In urban areas where real estate developers platted land for sale in lots, there was a history of placing restrictions, or covenants, on the use of the property. Such covenants were used, for example, to limit the location of retail stores, restrict the sale of liquor, bar ownership by certain racial or ethnic groups, and maintain property values by dictating a minimum expenditure on housing construction. Zoning helped shape development in similar ways, with open public involvement but very local impact. Developments such as Somerset West set the stage for Oregon’s later efforts at growth management, as zoning began to be only one tool in a statewide plan.

The photograph illustrates some of the key aspects of post-World War II suburban development. A single developer, Centex, controlled all aspects of the project. A selection of house types was available which could be modified by the buyer, but most were constructed as speculative houses sold “as is.” Residents were expected to drive to work and to shopping. The development did not provide for public parks or schools. The houses were of single-level or split-level ranch-style design that promised plenty of living space and a garage for two cars.