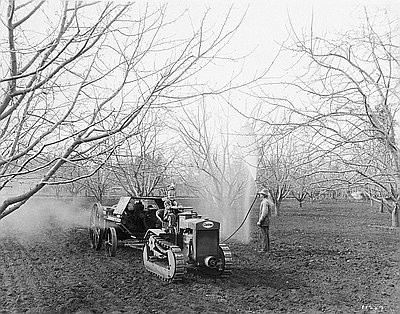 In the early 20th century, an increasing number of American farmers began to use chemical sprays against fungal diseases and insects. One of the earlier commercial products was Paris green, an arsenic-laced pigment that had previously been marketed as paint.

In Oregon, the state board of horticulture encouraged orchardists to use a variety of arsenic and copper solutions, lead arsenate, and lime sulfur to prevent damage from coddling moths, aphids, pear fruit worms, red spider mites, and fungal canker diseases. In the 1920s, people became aware of the health dangers from arsenic and lead arsenate residues. European countries negotiated international trade regulations limiting the allowable amount of chemicals residue on fruit and vegetable exports. In Oregon, the board of horticulture responded by requiring farmers to clean their export products in hydrochloric acid.

By the 1940s, chemists developed a number of synthetic organic pesticides, including dichlorodiphenyltrichloroethane (DDT). In 1962, Rachel Carson’s book Silent Spring raised awareness about the damaging effects of DDT and other pesticides to humans and the environment. The U.S. Environmental Protection Agency banned DDT in 1972.

This photograph, which shows workers packing apples into boxes, is identified by a hand-written note on the back as being “probably Hood River.” The photographer either was Benjamin A. Gifford, his son Ralph, or possibly one of the employees of Gifford’s Portland studio. Gifford took photographs in Oregon between 1900 …

This photograph, by Dana Olsen, originally appeared on the front page of the Oregon Journal as an illustration for an article titled, “Miscarriages Bring Herbicide Ban.”  The unprecedented “emergency action” to ban the herbicide, 2,4,5-trichlophenoxy acetic acid (2,4,5-T), from use in forestry and grazing operations and right-of-way maintenance for power …

In the 1920s, the Medford and Ashland commercial clubs produced this pamphlet to attract more people to Jackson County. The pamphlet extolled the climate and orchards of the valley, stating “a person who has lived here one year is never content again to live elsewhere.”

Early settlers moved into the …

The fruit industry has been an important part of the Hood River economy since the late nineteenth century. This early twentieth century photograph shows women working as cherry packers in a Hood River warehouse. Several men are also shown. The people in the photograph might have been relatives working for …