Summer Fishing Camp on the Columbia 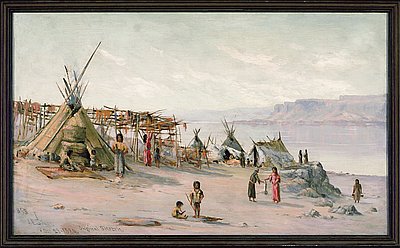 This painting was done in 1884 by J. E. Stuart, a prolific and popular American artist of landscapes, portraits, and American Indians. It depicts a late summer fishing camp on the Columbia River near Celilo Falls. The painting is in the collections of the Oregon Historical Society.

Representations of Indian buildings and structures in Oregon prior to the mid-nineteenth century are scarce, and our visual information of them can be problematic. In the terminology of art history, Indian art of the time was non-representational—it did not attempt to replicate images that the eye actually saw. Representational art was the work of certain European or American artists. Few of these came to the Pacific Northwest until the 1880s, and fewer still were those among them who depicted Indian life. Among these were Lt. Henry J. Warre (1819-1898), the artist on a British military reconnaissance of 1845, and the Canadian Paul Kane (1810-1871), who traversed the region in 1846-1847.

This painting’s visualization of an Indian fishing camp is documentary and representational in style, but is also a carefully crafted visual composition. The clothing reinforces the fact that this was executed well after contact with Euro Americans affected Indian life. The wooden fish drying racks, the temporary tule mat teepees, and the single tentlike shelter accurately represent Sahaptin life in the eastern end of the Columbia River Gorge. In response to seasonal fish runs, Indian families camped close to the rapids and falls near present-day The Dalles to fish for the five species of salmon as they migrated upstream to spawn. The first runs began in April, with the last summer run ending in October. Winter quarters in the Gorge were more substantial lodges, usually formed on a wooden rectangular frame set in an excavated area and covered with several overlapping layers of mats banked with soil. Winter village locations were sited to be above flood levels and protected from the strong winds of the Gorge, while summer camps could be located close to the river’s bank.

Born in Maine, Stuart came to California with his parents in 1860. He studied art in San Francisco, and first visited the Pacific Northwest in 1876. He moved to Portland in 1881 and operated a studio in Ashland in the early 1880s, but by 1886 he had moved to New York City. Financially successful, he subsequently lived in Chicago and San Francisco, and frequently returned to Oregon, where he was repeatedly drawn to the Columbia River Gorge and Mt. Hood. Although he favored colorful sunsets and picturesque landscapes, he was also noted for his documentation of the details of Indian life.