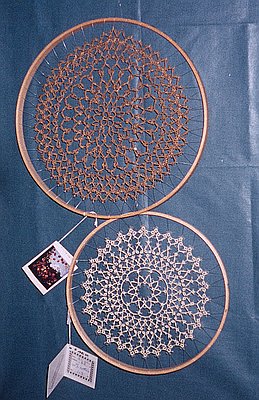 This unidentified photograph of Swedish “tatters” was taken by Revell Carr on June 30, 1998.  Scandinavian in origin, tatting evolved from knotting or tying rags together and progressed into decorative accessories for clothing and furnishings.

Swedes were the largest contingent of Scandinavian immigrants in the United States from 1820 to 1920. The earliest Swedish immigrants were middle-class business owners, adventurers, and/or technicians who came as passengers on ships carrying Swedish iron ore to the United States. However, by the 1850s and thereafter, the majority of Swedish immigrants were farmers. Although many were seeking religious freedom from the authoritarian Church of Sweden (Lutheran), the majority emigrated for economic reasons.  Economic pressure arose from a rapidly expanding population coupled with a limited amount of available land.  In 1870, 48 percent of Sweden’s farming population was landless. Moreover, “American letters” from friends and family members describing economic success and a better life across the Atlantic Ocean, motivated more than 1.1 million Swedes to migrate to the United States.

Swedes settled largely in the wheat belt of the Midwest. However, by the early decades of the twentieth century, Swedish immigrants and second-generation Swedes had migrated westward along the lines of the Northern Pacific and Great Northern railroads to the Pacific Northwest. In 1930, there were more than 11,000 Swedish immigrants and nearly 15,500 second-generation Swedes living in Oregon. The largest community was in Portland, but significant settlements were found in Astoria, Coos Bay, Bend, Klamath Falls, and Medford.  Swedish farmers in Oregon were well-known for purchasing clear-cut, stump-ridden lands and transforming them into productive farms.  The oldest Swedish-American settlement in the Pacific Northwest is Astoria, where Swedes were prominent in both the fishing and logging industries. The 2000 census noted 4.3 million Swedish Americans in the United States and over 107,000 living in Oregon.