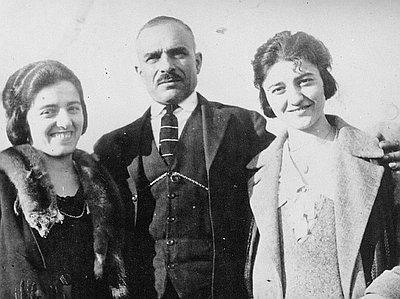 This photograph of Tatos O. Cartozian and his daughters was originally published in the Morning Oregonian on April 8, 1924 as an image accompanying the article, “Racial Questions Involved in Trial.” Cartozian was, at the time, defending his status as an American citizen in the U.S. Ninth Circuit Court, on the grounds that Armenians were white, not Asian.

In 1790, with the passage of the Naturalization Act, citizenship in the United States became officially restricted to “free white persons.” At that time, American legislators were concerned primarily with making distinctions between Europeans (“whites”), American Indians (“reds”), and Africans (“blacks”). Difficulties arose in the nineteenth century, when people from groups outside these initial racial categories who rejected the idea that they were not white applied for American citizenship.  Between 1878 and 1952—when racial restrictions were removed from U.S. naturalization law—émigrés from China, Burma, Japan, Mexico, Armenia, and other countries fought fifty-two race-defining legal battles  in U.S. courts to either gain or maintain their American citizenship—all of which hinged on judicial interpretations of whiteness.

In In re Halladjian (1909), Armenians were declared white and made eligible for citizenship. The decision was based largely upon “scientific evidence” presented during the trial that equated their Caucasian origins with whiteness.  But, during the early 1920s a significant shift in judicial interpretations of naturalization law led to a reevaluation of Armenian status.  In Ozawa v. United States (1922) and in United States v. Thind (1923), the courts denied citizenship to Japanese and Asian Indian applicants based on the belief that “common knowledge” in the United States held them to be Asian, not white.

In 1924, the United States challenged the citizenship of Tatos O. Cartozian, a Portland rug dealer who had gained his citizenship in 1923, seventeen years after his emigration from Armenia. The prosecuting attorney, John S. Coke, argued that “It is the contention of the government that it makes no difference whether a man is a Caucasian or not or what the racial and language history of his people may be if the man on the street does not recognize him as white.”  Cartozian’s lawyers responded by arguing that both science and common knowledge identified Armenians as white. Scientific testimony was given by anthropologist Franz Boas and ethnologists Roland Dixon and Paul Rohrbach in support of Cartozian’s case. To support the claim that Armenians were also commonly known to be white, the defense team drew testimony from leaders of racially-restrictive fraternal organizations like the Loyal Order of the Moose and the Masonic Grand Lodge of Oregon all of who attested to the common interpretation of Armenians as racially white, using Armenian membership in their organizations as evidence.  In the end, the judge agreed with the defense—Armenians were white, not Asian.

Immigrants, Ethnics, and Whiteness in the Northwest

Despite the embrace of ethnic heritage in late twentieth and early twenty-first century celebrations of cultures and traditions, ethnic labels have more often been a source of exclusion than acceptance in American history. While nearly all Americans can trace their roots to immigrant ancestors, some of those immigrants were accepted …