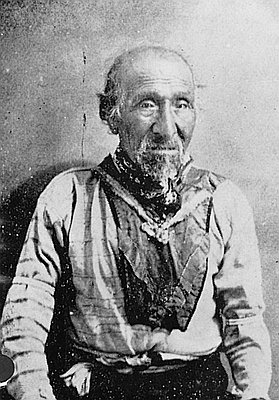 Tecumtum (“Elk Killer”), also known as Chief John, was chief of the Etch-ka-taw-wah, a band of Indians who lived along the Applegate River in southwestern Oregon. Tecumtum’s band was the last group of Rogue River Indians to surrender to United States forces during the Rogue River War of 1855-1856.

The discovery of gold in southwestern Oregon in the early 1850s and the subsequent rush of newcomers to the region exacerbated the already conflict-ridden relationship between whites and Indians in the Rogue River Valley. In the fall of 1855, one of Tecumtum’s sons and another member of his band were lynched by a mob of whites in Eureka, California. Not long after, a company of volunteers from Jacksonville attacked a peaceful Indian village just outside the Table Rock Reservation, massacring dozens of men, women, and children.

In response to these events, Tecumtum gathered his people and fled to the mountains, where he fought the invading whites for over a year. One government official noted that Tecumtum wanted to live peacefully with the whites, but “that he would rather die fighting for his rights than to…have his people killed for nothing when ever it suited the caprice of some men to do so.”

Tecumtum surrendered in the summer of 1856 when it became clear that victory over the whites was impossible. He and more than two hundred of his people were forced to abandon their ancestral lands, walking 125 miles north to their new home on the Coast Reservation, which later became the Siletz Reservation.

Two years later, both Tecumtum and his son Adam were imprisoned in San Francisco for allegedly plotting an uprising. In 1862, they returned to Oregon’s Grand Ronde Reservation. Tecumtum died of old age on June 6, 1864, at Ft. Yamhill, Oregon.