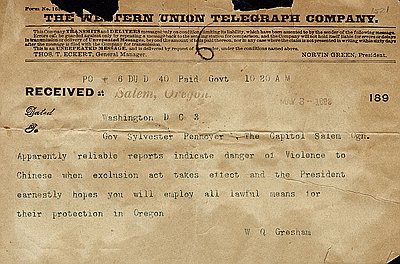 This telegram to Oregon Governor Sylvester Pennoyer from Judge Walter Gresham warns that extending the Chinese Exclusion Act might incite violence and asks that Pennoyer take action to protect Chinese immigrants. While no public violence in Oregon followed the passage of the federal 1892 Geary Act, which continued the ban on Chinese immigration for ten years, in prior years labor shortages and racial tensions had led to mob activity against Pacific Northwest Chinese.

Pennoyer had been propelled to the governor’s office in 1886 as a leader of the anti-Chinese crusade in Oregon. He advocated Chinese removal, arguing that low-wage Chinese workers undermined opportunity and pay for Euro-American labor. Between 1885 and 1887, mobs forced Chinese immigrants out of several Northwest cities and murdered Chinese laborers in Wyoming and Oregon. In Portland, groups associated with the Knights of Labor held rallies and forcibly marched Chinese from several areas of the city and from Oregon City, to the neighborhood known as Chinatown. Some were made to stand as exhibits in front of an anti-Chinese rally. Mobs also raided and burned Chinese homes near Guild’s Lake in Northwest Portland. The city’s leading merchants did not support anti-Chinese violence or political action, and Chinese people were not forced out of the city. The Oregonian published articles opposing the violence and harassment. The Chinese Exclusion Act, which became a permanent law in 1904, was repealed during World War II when China and the United States became allies.

U.S. Circuit Judge Walter Q. Gresham served as the U.S. Postmaster General, before becoming a judge and later the Secretary of State under President Grover Cleveland. The city of Gresham was named for him.

Schwantes, Carlos A. “Protest in a Promised Land: Unemployment, Disinheritance, and the Origin of Labor Militancy in the Pacific Northwest.” Western Historical Quarterly 13, 1982: 373-90.

In 1893, President Grover Cleveland asked Oregon Governor Sylvester Pennoyer to do what he could to prevent expected violence against Chinese immigrants. Pennoyer, an avowed states' rights advocate and no friend of Oregon's Chinese, responded by telegraphing Secretary of State Q.W. Gresham, "I will attend to my business; let the …