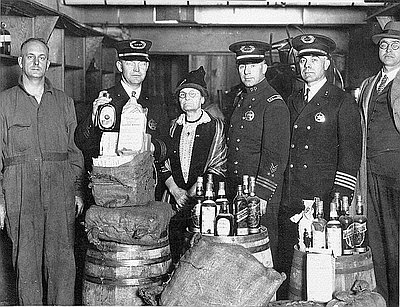 In fact, the police department used its basement as a warehouse for confiscated liquor, and only destroyed as much as the public demanded. Vice squad members sometimes delivered cases of liquor to city hall, and most speakeasies paid corrupt police officers for protection and tip-offs before liquor-raids.

Concerns about excessive liquor consumption have a long history in Portland. Baptists, Methodists, and Masons organized Portland’s first temperance crusade in March of 1851, and the first city ordinance against public drunkenness followed not long after. The Multnomah County chapter of the Sons of Temperance began meeting in 1856, and some of the movement’s strongest supporters in the state were Portlanders.

Temperance supporters once held a “dry” parade a hundred blocks long, and Simon Benson’s donation of bronze drinking fountains to combat drunkenness made him something of a local hero. In some cases, the same individuals who called strenuously for temperance were known alcoholics.

Not everyone favored Prohibition. Before it was passed, Portland obtained approximately twenty-five percent of its general operating funds from liquor license fees, and the city proved unable to replace all of that money. Portland was also a well-known bar town with establishments like Erickson’s, a saloon that boasted the world’s longest bar.  The Portland waterfront was raucous and vice-ridden. During prohibition, Portland’s position as a port city, meant that illicit imports of Canadian whiskey and local moonshine made their way to the town for both local consumption and redistribution. Portlanders were clearly of two minds on the subject of alcohol.