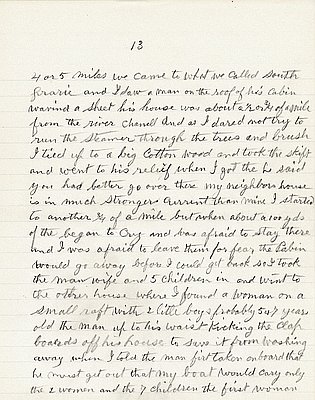 In this excerpt from an undated handwritten reminiscence, George Anson Pease, a steamboat captain based out of Oregon City, relates his experiences during the 1861 Willamette River flood, probably the most immense flood in the valley in recorded history. The “Great Flood” devastated the valley’s economy and resulted in the deaths of several people, but it also brought the valley's settlers together as a community and produced some notable acts of courage. While Pease describes only a few of his rescues in this document, one newspaper account credited him with rescuing forty people over the course of one week.

The volume of water in the Willamette River changes naturally according to seasonal variations in precipitation. Flooding was common prior to channel modification and the construction of flood control dams in the twentieth century. The flood of 1861 was an unusually severe occurrence, however, resulting from what meteorologists call a rain-on-snow event. November 1861 was cold and wet, and a great deal of snow was deposited in the mountains. December warmed considerably, however, and the snow turned to rain. The warm rain melted the accumulated snow, resulting in a rapid increase in runoff. One observer remarked that at the height of flooding “the whole Willamette valley was a sheet of water.”

Despite signs of regular flooding, many pioneers had settled in the floodplain of the Willamette or one of its tributaries. Floodplains were attractive places to locate a homestead since they contained flat, productive land close to the river, the primary transportation conduit in the mid-nineteenth century. Many settlers came to regret this decision, however, as the water rose around them, drowning their animals and destroying their buildings. Most managed to save themselves, or were rescued by courageous citizens like Pease, but a few did succumb to the floodwaters. A few small towns were wiped out by the 1861 flood and were never rebuilt, including Champoeg, the site of the first organized settler government in the Oregon Territory.

In late May and early June of 1894, the Willamette River rose well above 30 feet, flooding the central business district of Portland.  The water remained for days, inspiring some Portlanders to accept the situation with the humor as displayed in this shot of “hunters” taking aim at decoys floating …