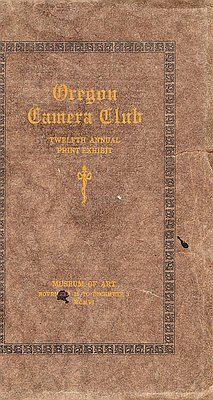 The Oregon Camera Club, organized in 1895 (versions of which exist today), was a popular amateur photography society that met monthly in Portland. Its formation mirrored the growth of photography clubs across the country, and the advertisement of members’ work in pamphlets like this one published in 1906 was a common practice. The Club put on annual exhibitions—the first photography exhibitions ever held in Portland—and handed out awards for outstanding work. As a result, local photographers often gained national significance. The Oregon Camera Club voted in its members, which numbered 18 in 1895 and grew quickly to 175 by 1902. The club provided instruction, important equipment like darkrooms and development supplies, and exhibition opportunities. Dues were $10 a year ($5 for women) and meetings were held every month on the second floor of the Oregonian building. The club also sponsored field trips. One of the most popular photography outings was up the Columbia River through the gorge past Rooster Rock, Multnomah Falls, and Oneonta Gorge. Sometimes over 200 amateur photographers would be on board a steamer, taking pictures, comparing techniques, and documenting the landscape. Such events popularized photography as a recreational activity and led to increased membership in the Oregon Camera Club. Among the early members of the club were Lily White and Sarah Ladd. Through their involvement with the Oregon photography community, they caught the attention of Alfred Stieglitz and his exclusive Photo-Secession, an organization based in New York committed to the promotion of photography as fine art. Both White and Ladd represented the United States in world-wide photo exhibitions, bringing the Oregon landscape to international audiences.

Lily White took this photograph of her houseboat Raysark at the base of “Castle Rock” on the Washington State side of the Columbia River in about 1902. The 800-foot tall monolith is the second largest in the world, after the Rock of Gibraltar. It is the remnant of the basalt …

Sarah Hall Ladd took this photograph of the “submerged forest” on the Columbia River circa 1902-1904. The remains of trees in the river are found 25 miles above Cascade Rapids. Most of this area is now submerged behind Bonneville Dam.

Lewis and Clark were the first Euroamericans to record this …